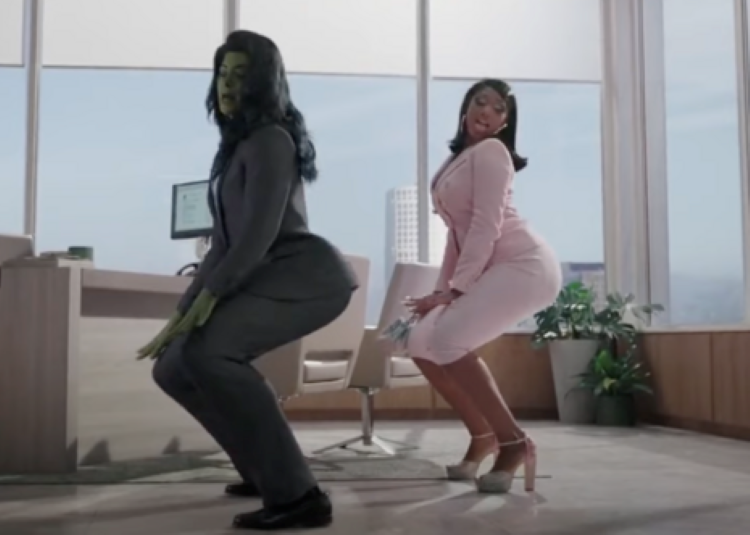 DISNEY PART OF THE LOONIES TO DESTROY AMERICA – BIDEN LOVES THEM

The woke Disney+ series She-Hulk: Attorney at Law completed its nine-episode run last night and may go down as the worst series ever in the Marvel Cinematic Universe (MCU).

The show was such a mess week after week that it’s hard to process its many flaws, but here are five critical ways it failed.

1. She-Hulk was a superhero show without a hero.

Viewers tune-in to superhero shows to see a main character save lives and stop villains. But in this series, the protagonist Jennifer Walters (Tatiana Maslaney), aka “She-Hulk,” often transformed into her hero persona for vapid reasons like getting dates or garnering attention at a wedding. The audience was left watching a “hero” who rarely used her powers in selfless acts of heroism.

2. The main character was whiny, shallow and narcissistic.

Walters’ motivations for transforming into She-Hulk were often pointless because the character was whiny, shallow and narcissistic. She drank a lot, slept with men she barely knew and had no life outside of being a lawyer.

She also talked all the time about the fact that she was a lawyer because her career status was her identity. How can an audience root for someone so one-dimensional and unlikable?

Tatiana Maslaney, the actress who played Walters, has shown enormous talent in other television projects such as HBO’s Perry Mason. Sadly, her skills were wasted in She-Hulk.

3.The show was plagued throughout with woke feminist ideology.

The show’s lousy writing was due in part to the brittle feminist viewpoint projected onto the entire series. The first episode, “A Normal Amount of Rage,” was roundly mocked on Twitter for She-Hulk’s condescending speech to Bruce Banner (Mark Ruffalo) about how life is harder for her as a woman.

The next eight episodes continued that theme by regularly making the men around her nasty, weak, deceptive or creepy. As culture critic “The Critical Drinker” noted in a commentary on the show, She-Hulk showcased “the writers’ complete ignorance of men, modern culture and normal interaction between humans.”

4. The episodes had little plot with stories going nowhere.

The writers apparently were also ignorant of basic story elements such as plot and character development. Each episode rambled along without moving a narrative arc forward.

She-Hulk went shopping for a superhero outfit. She-Hulk twerked with Megan Thee Stallion. She-Hulk got drunk at a wedding. She-Hulk hung out at a New Age-style retreat run by a reformed villain.

All those storylines had little in the way of exciting action or memorable lines. Walters was still the same self-absorbed person at the end of each episode as she was at the beginning. What was the point?

The writers must have been aware that the show was a disaster in the making because in the final episode, “Whose Show is This,” She-Hulk breaks into the writers’ room and yells, “What kind of a stupid finale is this?”

She then fights her way into a room with an artificial intelligence (AI) in charge of Marvel Universe stories. She argues with the AI about, among other things, fans expecting “a bunch of plot.”

Those crazy fans expected a plot!

5. The series disrespected fans of the Marvel Universe.

As the finale scene with the AI made clear, She-Hulk: Attorney at Law writers had no respect for fans who enjoy the Marvel Universe, mocking it all as a mindless product generated by a computer.

Woke ideology tends to borrow beloved franchises, ruin them and then insult those who loved the original characters or stories.

Wokeism is incapable of creating original content. It can only parasitically feed off old content and ruin it. Disney’s breathtakingly bad She-Hulk: Attorney at Law was one of the most embarrassing examples of this phenomena to date.

It means taking on leftist TV shows when they sneak leftist ideology into their plots. It means pointing out what’s genuinely “funny” in late-night comedians’ routines. It means calling out the racism and leftist bias that permeates today’s sports media. These days it means holding Big Tech to account for censorship of conservative speakers and ideas.

Defending America’s traditional values from attacks in movies, TV, sports, music, books, social media, and the news is a full-time job. We are part of the only organization dedicated to this critical mission, and we need your help.

Donate today to help MRC Culture continue to document and expose bias in entertainment, sports, and pop culture. Your gift of $25 a month goes a long way in the fight for free and fair media.

We seek only entertainment that does not mock our values, sports coverage that does not destroy our love of the game, and a culture that reflects the values and freedoms on which our country was built. We need your help with this vital mission.