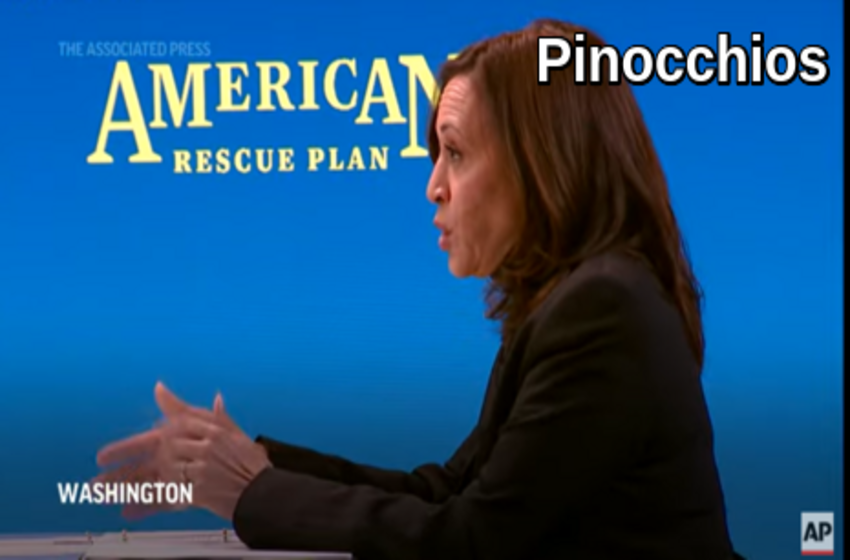 SHE IS KNOWN TO THE WORLD AS VICE PRESIDENT PINOCCHIOS HARRIS

Proving that it is actually possible to practice journalism when dealing with Democrats and voting laws, CBS This Morning’s Ed O’Keefe on Tuesday pressed Texas Democrats who fled the state, meeting them at the airport in Washington D.C. to demand answers.
Showing a noted difference from how the network covered the fleeing Democrats on Monday night, O’Keefe pressed, “To the constituents who elected you to do a job, be in Austin and they see you leaving the state today, and they think ‘they’re running away from their responsibilities.’”

After a Texas Democrat declared himself heroic for leaving the state, O’Keefe kept pressing, exposing how the stunt is ultimately pointless and likely to fail:

ED O’KEEFE: How long will you be here in Washington?

REP. CHRIS TURNER (D-TX): Our intention is to be out of Texas until this session is over.

O’KEEFE: And if he [Texas Governor Greg Abbott] calls another one right away?

TURNER: That’s our message to Congress. We need them to act now. Because they will keep calling these sessions to pass voter suppression legislation.

This is quite a difference from Monday’s CBS Evening News. There, anchor Norah O’Donnell hyped the politicians refusing to do their jobs: “Democratic lawmakers bolted the state capitol this afternoon to prevent passage of a new election law, and they say they’re prepared to stay away for weeks.”

On Tuesday’s Today, NBC host Hoda Kotb described the Democrats in heroic terms: “Getting out of dodge. Dozens of Texas Democrats flee the state in an attempt to block a voting bill they claim is a dangerous attack on democracy.”

So O’Keefe proved it can be done. Journalists can ask these Democrats real questions. The question is, will more of them?

The actual journalism on CBS was sponsored by Tylenol and Subway. Click on the links to let them know you appreciate it.

ANTHONY MASON: Texas is on the front lines of a fierce battle over restrictive voting laws and the confrontation is escalating. Dozens of Democrats in the state legislature bolted to Washington, D.C., yesterday to protest controversial Republican efforts to overhaul election laws. They say they’ll stay there for weeks. Now, Governor Greg Abbott is threatening arrests. Ed O’Keefe was at the D.C. airport when the Democratic lawmakers arrived.

ED O’KEEFE: More than 50 Texas House Democrats arrived in the Washington airport last night aboard a pair of private jets after fleeing a special session of the Texas legislature, called to address about a dozen issues, including changes to state elections laws.

TREY MARTINEZ FISCHER (D-Texas State Rep): There is nothing special about this special session. This is a suppression session. We’re not going to put up with that. Democracy is on the line. The eyes of the nation are on Texas.

O’KEEFE: Texas Democrats killed a similar Republican-backed elections bill in May by walking out closing minutes of the regular session. So Governor Greg Abbott and Republicans are trying again. Their proposals would eliminate drive through and 24-hour early voting used for the first time in the predominately Democratic Houston area. They would expand early voting hours to some medium sized counties. Add I.D. requirements to voting by mail and give more powers to partisan poll watchers. Last night, Abbott called the Democrats quitters.

GREG ABBOTT: It’s like during a football game or a baseball game, taking their equipment when they’re way behind and just leaving the field. That is not the way that Texas — Texans do things.

O’KEEFE: And he said they will face legal consequences.

ABBOTT: Once they step back into the state of Texas, they will be arrested and brought to the Texas capitol and we will be conducting business.

O’KEEFE: To the constituents who elected you to do a job, be in Austin and they see you leaving the state today, and they think ‘they’re running away from their responsibilities.’

REP. CHRIS TURNER (D-TX): Nothing could be further from the truth. We’re not going to sit in Austin in the House chamber and watch the Republican majority steam roll the voting rights of our constituents. We’re fighting back. We’re leaving so they can’t do that.

O’KEEFE: How long will you be here in Washington?

TURNER: Our intention is to be out of Texas until this session is over.

O’KEEFE: And if he calls another one right away?

TURNER: That’s our message to Congress. We need them to act now. Because they will keep calling these sessions to pass voter suppression legislation.

O’KEEFE: Voting rights legislation failed to advance in the U.S. Senate amidst Republican opposition, but bipartisan talks on the subject continue in hopes of finding a solution. Today President Biden heads to Philadelphia to discuss voting rights. Aides say he’ll make the moral case for why restricting the right to vote is a form of suppression. But amidst the talks on infrastructure and other big issues they’ve got to handle, Gayle, the idea that Congress would pass voting rights legislation before the start of their August recess? That’d be a tall order.

The media has abandoned all pretense of objectivity to become a pro bono ad agency for the progressive movement, infusing left-wing talking points into every issue, from the pandemic to the “cultural revolution.”

At MRC’s NewsBusters, we analyze the threat to democracy the media has become and expose the tools of their trade: deceit, bias, omission and manipulation.

The support of our spirited and patriotic audience gives us the strength to take down giants. Please consider a donation today. $25 a month goes a long way in the fight for a free and fair media.