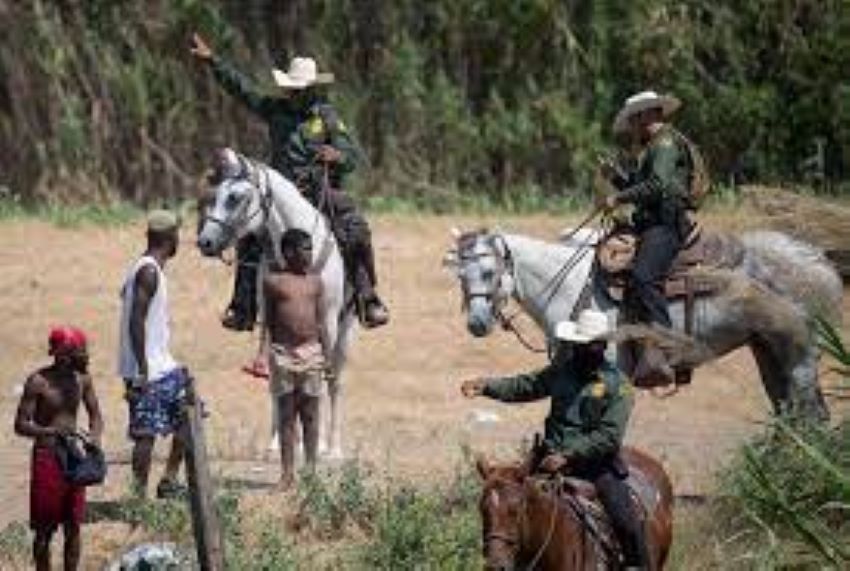 Four U.S. Border Patrol agents investigated for how they used horses and reins to block migrants from illegally entering the United States from Mexico in an incident last September will face discipline, according to a top department official.

Customs and Border Protection Commissioner Chris Magnus announced Friday afternoon that the Department of Homeland Security’s investigators found agents made mistakes in how they responded to a mass migration incident on Sept. 19, 2021.

“There is no justification for the actions of some of our personnel, including unprofessional and deeply offensive conduct,” said Magnus, who spoke at a press conference at CBP headquarters in Washington.

Magnus said the 511-page government report compiled from more than 30 interviews concluded that federal agents in Del Rio, Texas, failed on three levels to carry out their border security jobs appropriately. CBP will announce the disciplinary measures in the coming days.

In a highly publicized incident that unfolded as 30,000 primarily Haitian migrants came across the Rio Grande from Mexico and set up camp under a bridge, mounted Border Patrol agents were photographed and filmed attempting to prevent people from walking across the river and past their horses on the U.S. shoreline.

Male migrants ignored agents’ verbal orders to turn around, and the mounted agents rode along the riverbank as migrants tried to get past them. In a photograph, an agent appeared to use something in his hand to whip a man, though the Border Patrol has since said agents are not issued whips and that the agent had held the horse’s reins in such a way to create distance between the animal and the man to prevent the horse from trampling him.

Magnus said the agents were on-scene at the river that day at the request of the Texas Department of Public Safety, a state law enforcement agency that has no jurisdiction over the federal agents. The agents were helping Texas DPS because their supervisor had approved it. However, the supervisor had not obtained approval from management.

“The report showed there were failures to make good decisions at multiple levels of the organization,” Magnus said in a written statement. “Failures to maintain command and control over Horse Patrol Units, lack of appropriate policies and training, and the overall chaotic nature of the situation at Del Rio at the time contributed to the incident.”

At the time of the incident, people on social media suggested agents had whipped migrants. Before any investigation had been undertaken, top Biden administration officials condemned the federal law enforcement agents, which former Border Patrol officials worried could put pressure on investigators, who may fear reaching a different conclusion than Joe Biden’s and Kamala Harris’s statements.

“It was horrible what — to see, as you saw — to see people treated like they did: horses nearly running them over and people being strapped. It’s outrageous,” the president told reporters on Sept. 24, 2021. “I promise you, those people will pay. They will be — an investigation is underway now, and there will be consequences. There will be consequences. It’s an embarrassment. But beyond an embarrassment, it’s dangerous; it’s wrong. It sends the wrong message around the world. It sends the wrong message at home. It’s simply not who we are.”

DHS Secretary Alejandro Mayorkas said he was “horrified” by the images before later admitting he reacted “without having seen the images.”

Magnus, a former police chief from Tucson, Arizona, who had criticized the Border Patrol while in that role, defended agents from the whipping claims.

CBP found one agent acted in an unprofessional manner “by yelling denigrating comments regarding a migrant’s national origin and sex, stating in part, ‘Hey! You use your women? This is why your country’s shit, you use your women for this.'” The comment was in reference to a man who pushed a woman in front of him in an attempt to keep the agent away.

Mayorkas vowed before Congress on Sept. 22, 2021, that the CBP investigation would conclude within “a matter of days, not weeks,” if agents were too aggressive, but no conclusion had been publicly disclosed. Border Patrol union and former DHS officials from the Trump administration said the comments would make a fair investigation impossible, given that the DHS and CBP superiors of investigators called it abuse before any investigation was undertaken.

The Border Patrol was preparing to discipline agents for “administrative violations,” according to two agency officials, confirming an earlier report from Fox News. It is unlikely they will be fired.

Magnus said the nearly 10 months it took to conclude the investigation was partly due to a hold-up by the U.S. Attorney for the Western District of Texas’s Office, which took six months to look over the report and conclude no charges were worth pursuing. CBP received the report back on March 11, nearly four months ago.