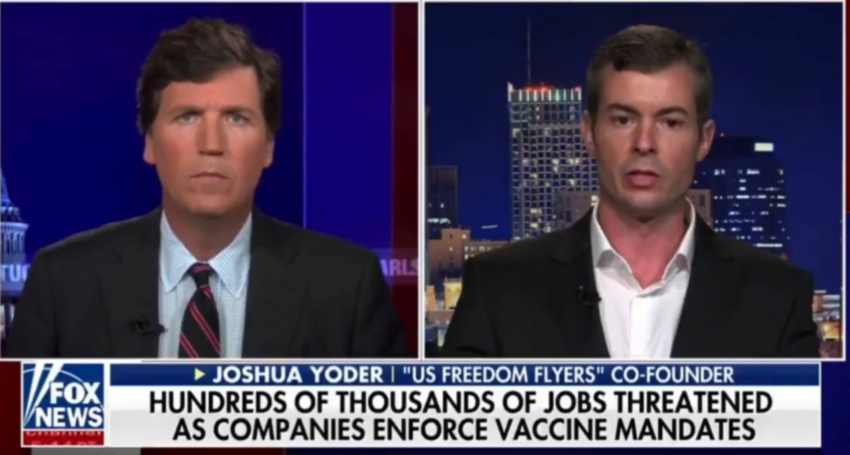 OBIDEN IS A BOLD FACE LIAR – NOW THREATENS OUR ECONOMY

There have been widespread rumors this week that the thousands of flights canceled this past weekend by Southwest Airlines have been the result of massive amounts of people calling in sick to protest COVID-19 vaccine mandates for the airline industry.

Neither management nor airline employees would admit to a protest movement like this, as it is illegal and considered a matter of “national safety.”

When the vast majority of them refused, Reagan banned them from federal service for life.

Pilot Joshua Yoder, who is the co-founder of the U.S. Freedom Flyers that recently produced a video that we published, appeared as a guest on Tucker Carlson’s show on Fox this week.

He made sure to explain that he and his group would never endorse a strike or “sick out” as he knows that this is illegal.

Here is what he did say on national TV:

If you have flights reduced by 30% because 30% of the pilots are fired because they won’t take the vaccine, this is going to affect how your goods get here from overseas, how they’re distributed to the stores.

We have all the control. And the control comes from a simple word. And that’s “no.” We just don’t need to comply.

I think you will see massive disruptions in the supply chain and in your travel, if we just stand up and say “no.”

If these companies fire us, and they fire 30% of the workforce, aircraft are going to stop moving. And it’s going to affect you.

Another commercial airline pilot, who was only identified as “David in Orange County,” called into the American Journal show on Infowars.com this week.

He started out by explaining that they were given a very small window of opportunity to try and file a medical or religious exemption to the mandated COVID-19 shots, making it almost impossible to do so.

He then goes on to explain that all pilots must maintain a mandated FAA medical certificate of “good health” based on a medical exam, and that if the COVID-19 shots cause any type of injury that would cause them to fail that exam, that basically their careers are over.

He expressed surprise that more pilots were not talking about this subject.

David also addressed the issue of flying with pilots who have taken the COVID-19 shot, and their increased risks for blood clots. He stated:

I’ve noticed that some of the pilots who have taken the shot are almost mentally missing things that are kind of surprising, that (they) wouldn’t normally miss. It’s a good thing there’s two of us up there, because we can at least bounce things back forth with each other and work together as a team.

Watch both interviews. This is on both our Bitchute and Rumble channels.

Here is the Freedom Flyers video.