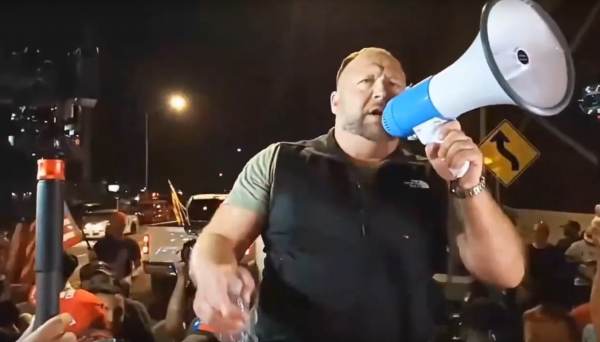 Big Tech has done everything possible to cancel Alex Jones, but that isn’t stopping the crowd at the Arizona elections office protest from giving him a raucous welcome.

The InfoWars founder arrived this evening, megaphone in hand, to bolster the passionate crowd of Trump supporters who are standing up to election fraud.

“They tried to steal the elections for the Chicoms, but America’s waking up and you’re the best people in the country! we salute you!” he shouted up on arrival, as the crowd started going nuts. “America is united, and America is awake!” before a chant of “1776” broke out. “I admire you, and I salute you, and appreciate you!” he shouted to the crowd. “The world is watching the example of Arizona. The president is watching the example. We’re not gonna let them steal it in your town. We’re not gonna let them steal it in Pennsylvania!”

“America’s not perfect, but it’s our country. And this country’s being captured by the globalists, and the Chicoms that own Biden, and we’re not gonna let a communist Chinese agent take control of this republic. We are standing in defense of the republic now, in this incredible moment.”

Livestream can be found on the invalidcookie channel: