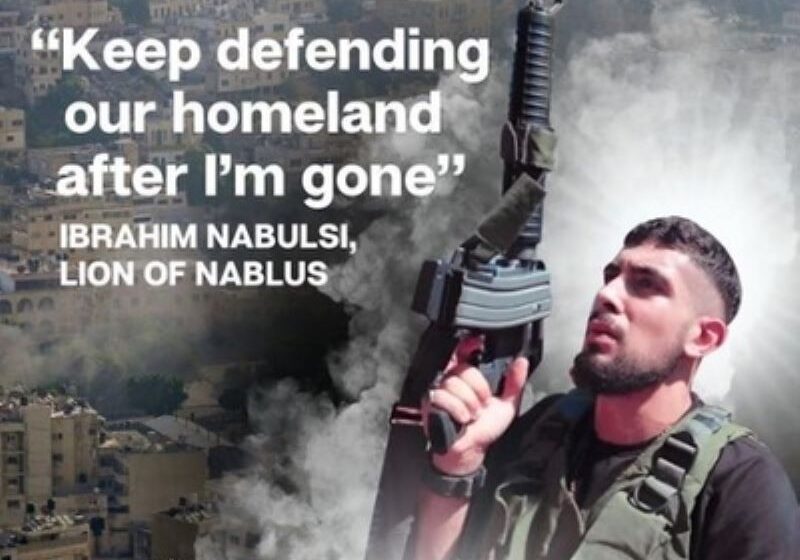 A virulently anti-Israel group with an active U.S. presence on Tuesday glorified a top Palestinian terrorist reported to be a commander of the U.S.-designated Al-Aqsa Martyrs’ Brigades.

“The Lion of Nablus, Ibrahim Nabulsi was beloved by all in the city, emerging from an early age as one of its foremost defenders and resistance fighters,” said a post on the Palestinian Youth Movement’s (PYM) Facebook page. “Nabulsi gave his life to protect and guard Nablus from zionist [sic] incursion,” the post added, describing him as “a prime example of the sacrifice routinely given by the youth of the city to ensure its continued freedom from the occupation.”

Ibrahim al-Nabulsi and two other Palestinians were killed Tuesday in a gun battle with Israeli security forces in the northern West Bank city of Nablus. The fighting followed a three-day conflict between Israel and Palestinian terrorists in Gaza triggered after the Palestinian Islamic Jihad (PIJ) launched more than 1,000 rockets into Israel in response to the arrest of its leader Bassam al-Saadi. To circumvent a major terrorist attack, Israel launched Operation Breaking Dawn targeting PIJ leaders and infrastructure in Gaza.

Al-Nabulsi has been on IDF’s wanted listed for many years and was involved in a June shooting at Joseph’s Tomb in Nablus that wounded two Israeli civilians and an IDF commander.

The PYM post also included what is purported to be al-Nabulsi’s last recorded message: “I love my mother. Take care of homeland after me. I request for the sake of our honor, no one abandon the gun. I am here besieged, and I am going to be martyred. Pray for me.”

The Al-Aqsa Martyrs’ Brigade, which is linked to the West Bank’s ruling Fatah party, warned of “blood for blood” retaliation and threatened “operations that will shake” Israel.

PYM was not alone in mourning al-Nabulsi.

The antisemitic group Students for Justice in Palestine (SJP)‘s Wayne State University chapter called al-Nabulsi a “martyr” and “Lion of Nablus,” adding he was “brutally murdered…by the Israeli Occupation Forces.”

“To have your mother be so happy and proud of you and praying for you with such enthusiasm and sincerity is the ultimate aim of any Muslim,” Herzallah wrote. 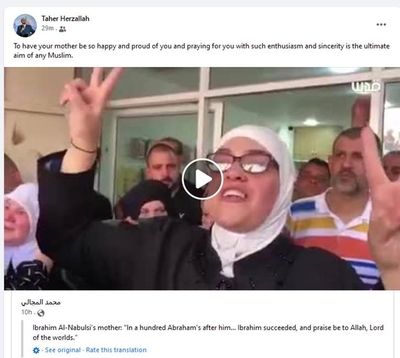 PYM has a record of eulogizing and promoting people affiliated with U.S.-designated terrorist groups, including the Popular Front for the Liberation of Palestine (PFLP), Palestinian Islamic Jihad (PIJ), and Hamas.

In an Aug. 6 Facebook post, “Glory to our Martyrs,” PYM listed the names of “martyrs” killed during last week’s fighting between PIJ and Israel. It included the name of PIJ commander Tayseer Jabari, who had been killed in an Aug. 5 IDF airstrike.

“The blood of the martyrs is the price paid for Palestine’s liberation,” said the post. “May each martyr’s presence be felt among us always, and may their ultimate sacrifice be remembered at the hour of liberation.”

Kanafani co-founded the PFLP and served as its spokesman at the time the terrorist group carried out the 1972 Lod Airport massacre. Three gunmen recruited by the PFLP from the Japanese Red Army opened fire on civilians at the Israeli airport killing 26 people and injuring many more.

An Instagram post discussed the role PYM and the PFLP-affiliated Samidoun played in mobilizing “all Palestinians, Arabs and internationalist supporters of the Palestinian cause to commemorate the anniversary through organizing efforts and community events throughout the world.”

Samidoun has chapters and affiliates in the United States, including in New York and New Jersey.

Samidoun also published a July 8 video broadcast from PFLP Central Committee member Suhair Khader commemorating “the 50th anniversary of the martyrdom of the great writer and journalist, our comrade and leader Ghassan Kanafani, the writer, the person, the exceptional artist, one of the founders of our great party, the one who drew its slogans and formulated its first statements and texts.”

“Every revolution that defeats the torturers, racists and exploiters brings us closer to victory over the Zionist colonial entity and the defeat of its racist criminal project called the ‘State of Israel,'” said a translation of Khader’s speech published on Samidoun’s website.

At an Aug. 8 NYC rally for Gaza co-sponsored by PYM, Samidoun, Within Our Lifetime (WOL) and other radical groups, protesters justified terrorism and called for Israel’s destruction.

The fact that PYM sponsors rallies calling for Israel’s destruction should come as no surprise.

The group is ideologically opposed to a peaceful resolution of the Israeli-Palestinian conflict and supports the creation of a Palestinian state from the Jordan River to the Mediterranean Sea that would swallow up all of Israel.

In a June 2018 Facebook post, PYM “reject[ed] the legacy and implications of the Oslo Accords, which resulted in the political and geographic fragmentation of our people and struggle by reducing liberation to a state-building project closed off to Palestinians outside the West Bank and Gaza and forecloses our full right to return.” The post also called “Zionist colonization…the root cause of our dispossession, and that we will not achieve true justice and liberation until the colonial state has fallen and all of our people are allowed the right to return to their homelands.”

PYM is a staunch advocate of the antisemitic Boycott, Divestment, and Sanctions (BDS) campaign against Israel. In March, PYM’s Toronto chapter urged the Harbourfront Centre to cancel three days of performances by Israel’s L-E-V dance troupe. If it didn’t, “[t]he Harbourfront Centre is complicit in art-washing the Zionist colonization and apartheid regime against the Palestinian people by hosting this performance.”

The shows went on.

PYM’s brazen glorification of Palestinian terrorists, ideological opposition to a peaceful resolution of the Israeli-Palestinian conflict, ties to PFLP-affiliated groups, and BDS support exposes the group’s sinister agenda to justify terrorism under the guise of fighting for Palestinian human rights.