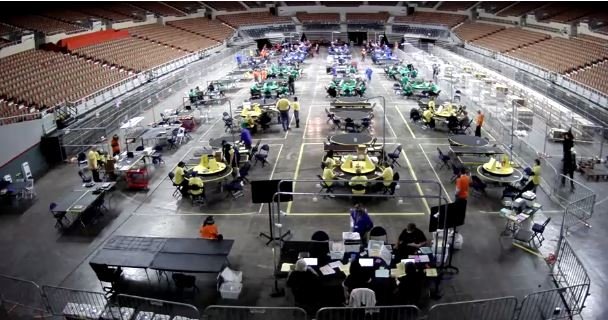 These are words the Democrat Party loves to throw around to fluff their own ego while attacking Republicans.

But now, these are words the Democrat Party is terrified of as they seek to smother any talk of the 2020 election. Instead, they’re blocking and obstructing 2020 election audits, gaslighting on election integrity efforts, and using their allies in the mainstream media to cover their tracks.

On Tuesday, Joe Biden gave a “major” speech billed as a “voting rights” address in Philadelphia. In reality, he unleashed a slew of dangerous lies on Republican election reforms calling them the “greatest threat since the Civil War.”

Setting aside Biden’s racial fear-mongering on GOP voting bills that actually increase access to voting, Biden’s real reason for being in Philadelphia was no secret – to attack and discredit the pending forensic investigation of the 2020 election in Pennsylvania.

We’ve already seen very significant irregularities and fraud unearthed in Arizona and Georgia’s election audits. On the heels of these deep discrepancies, Pennsylvania State Senator Doug Mastriano has requested a full forensic review of pivotal Pennsylvania counties, including Philadelphia county, and rightly so. Philadelphia specifically has been a hub of corrupt elections for years.

The White House’s response? Dispatch Biden to attack the majority of Americans across this country who are concerned with election integrity and are in favor of the audits.

According to Rasmussen, 55 percent of voters support election audits. Yet Biden – the same Joe Biden who campaigned on unity – called those concerned with election integrity to be “bullies and merchants of fear, peddlers of lies” and said they were “threatening the very foundation of our country.”

If Joe Biden and Democrats have nothing to hide, why would they oppose the audits? Wouldn’t they want to prove that the 2020 election went off without a hitch, as they claim?

When tens of millions of Americans have questions as to the legitimacy of our elections, it is imperative that we get to the bottom of it. Dismissing these claims as “the Big Lie” and scorning anyone who dare question the narrative does great harm to our democratic system and subsequent elections.

Moreover, it highlights Biden’s weakness in showing that he doesn’t want to defend his own legitimacy as Commander in Chief.

The reality is, Democrats changed the rules in 2020 and now