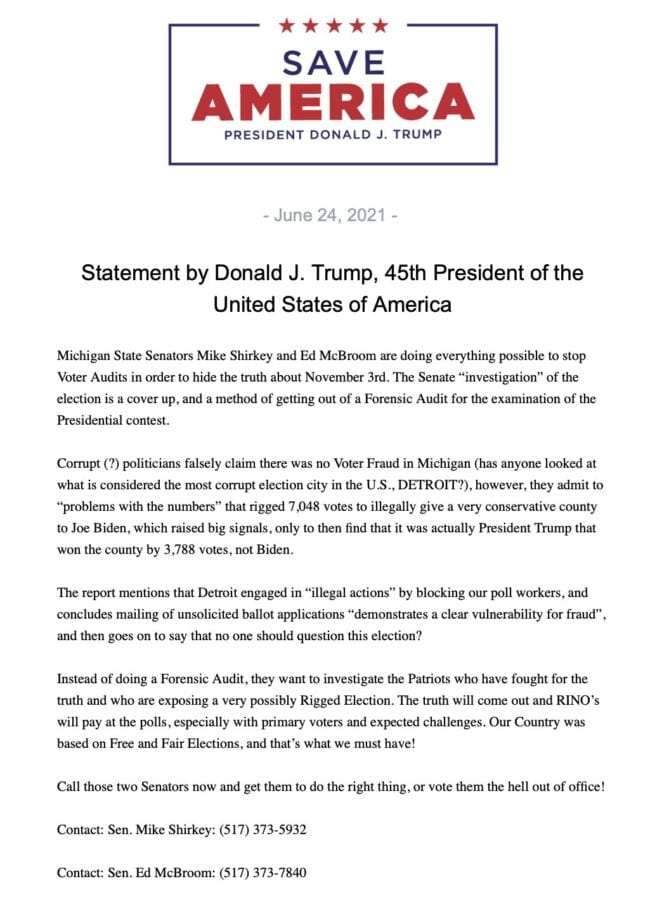 100 Percent Fed Upreports- In a ridiculous report released yesterday, the two Republicans say they found no evidence of fraud in the 2020 election even though a forensic audit has not been done and is the only way to prove there was no fraud. Red flags are everywhere in Michigan, and Republicans shouldn’t refuse a complete forensic audit unless they have something to hide.

This comes just a day after Michigan Rep. Steve Carra introduced a bill asking for a forensic audit of the 2020 election. The bill includes, “Making sure machines were not connected to the internet.”

Over 7.5 K affidavits were delivered to Senator Shirkey and Senator McBroom’s offices last week, requesting a forensic audit in Michigan. The response by these two Republican senators is a slap in the face to the thousands of Michigan citizens who want an investigation.

President Trump released a statement today targeting Senators Mike Shirkey (R) and Ed McBroom (R). In his statement, Trump claims the two state Senators were doing “everything possible” to stop another audit of the state’s election.

rizona Secretary of State candidate Mark Finchem also responded to the statement by the feckless Republican lawmakers in a tweet:

“As for those who spread unfounded conspiracy theories or false information, the [MI Senate] committee is also recommending that MIAG Dana Nessel consider investigating them.” Would love to see this go into a courtroom, Sen. Ed McBroom.

Former MI Senator Patrick Colbeck, who became a target of the left and of RINOs in MI when he testified about tabulators that were potentially connected to the internet at the TCF Center where absentee ballots were counted in Detroit, responded to Mark Finchem’s tweet by saying: