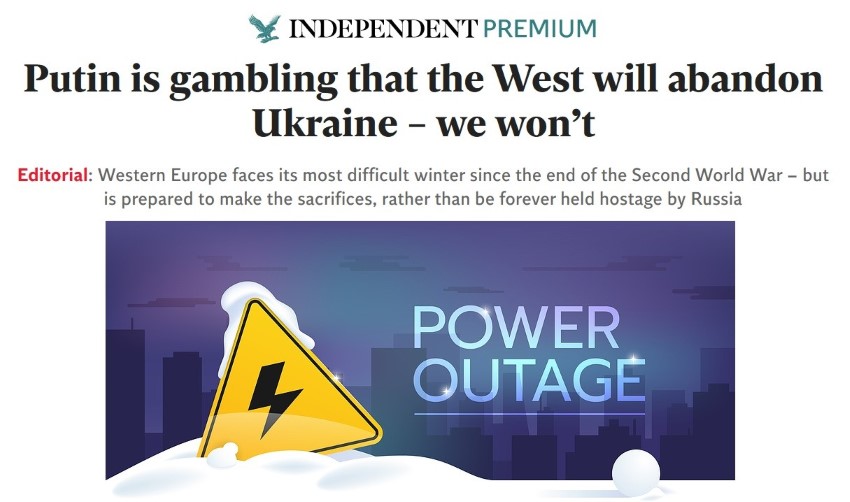 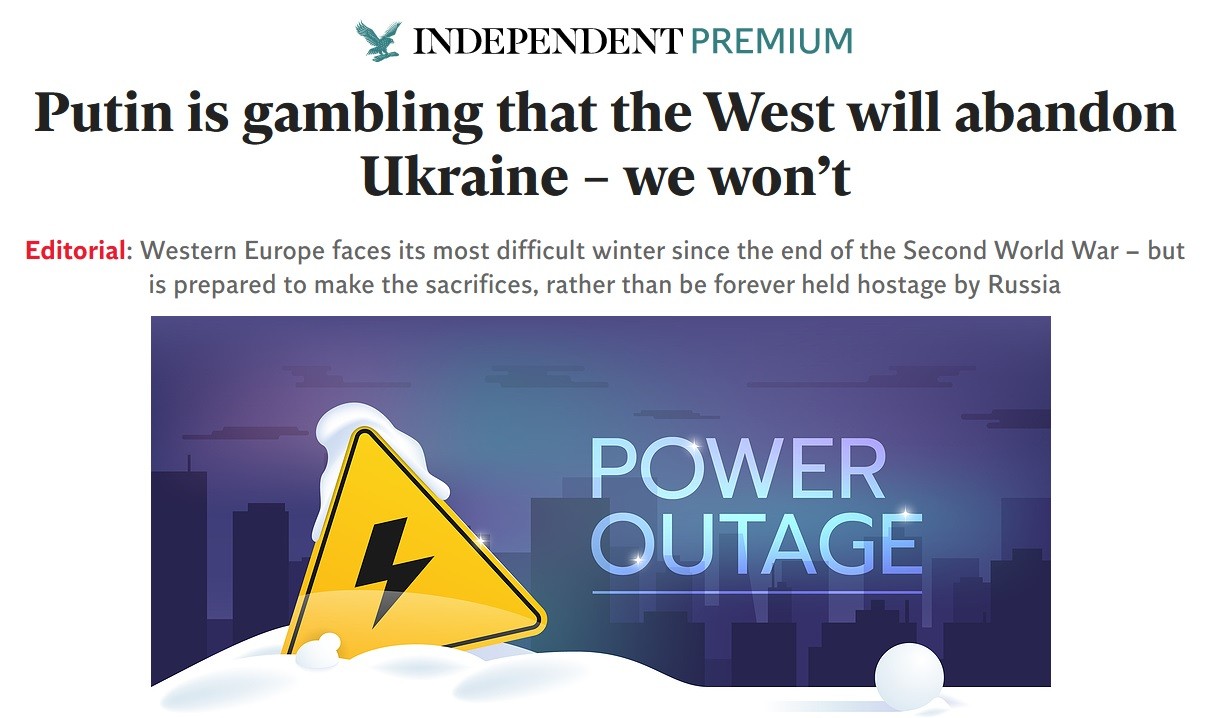 The fighting in Ukraine has escalated this week, as Russia has reportedly started a new bombing campaign against key infrastructures in many cities inside Ukraine as a response to an alleged bombing of a key Crimean bridge.

If one only gets their “news” from the Corporate Media, it would appear that this is an act of desperation by Putin in a failing war for Russia.

As of the time of writing this article, here are the headline stories in the U.S. Corporate Media via Google News: 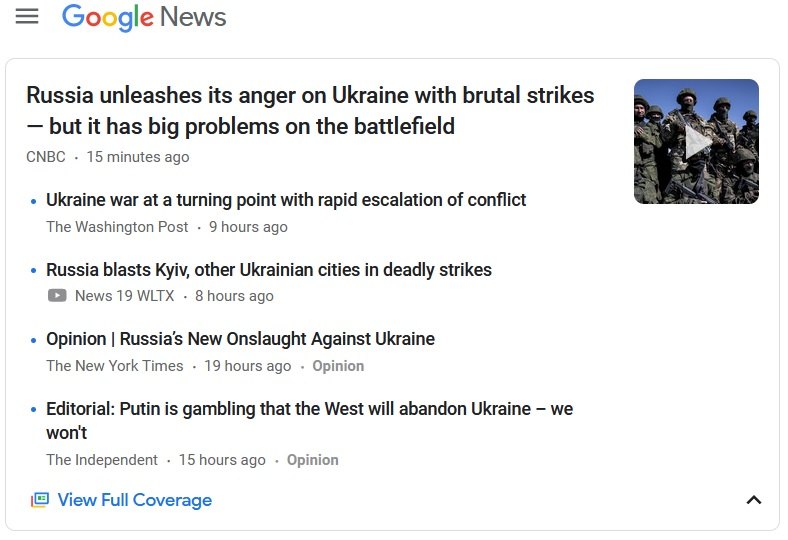 One of these headlines is from The Independent in the UK:

If you live in “Western Europe,” does this editorial represent your sentiment on this war? Are you prepared to “make the sacrifices” this winter to not be “held hostage by Russia?”

Here are what should be the real headlines for the past few days as this war quickly escalates, but that the Corporate Media is either not reporting or only reporting as non-headline news.

First, Kiev’s power grid was so badly damaged in these recent attacks, that the capital city of Ukraine is now going through rolling blackouts, and the Ukraine Energy Ministry announced yesterday that it had to stop exporting electricity to Europe, as energy supplies for Europe are quickly disappearing.

Russia’s mass missile strike on Ukraine that struck heat generation and electrical substations on Oct. 10 forced Ukraine to stop exporting its electricity to the European Union in order to stabilize its own grid starting Oct. 11, the Ministry of Energy said.

The ministry didn’t specify a date for export renewals.

Ukraine’s electricity system was integrated into the European grid in March to cut off the country from its electricity dependency on Russia, and Belarus in the wake of Russia’s full-scale invasion.

Residents of the Ukrainian capital and Kiev Region will experience power outages of up to four hours under a new schedule of rolling blackouts introduced by the grid operator.

The measure was introduced on Tuesday and is aimed at “balancing the power system and avoiding large-scale blackouts,” privately-owned energy company DTEK announced on Tuesday. It cited instructions it received from the national transmission system operator, Ukrenergo.

The rotating outages will affect both industrial consumers and regular citizens, and was introduced after a massive Russian attack on Ukraine’s infrastructure on Monday. Ukrenergo called on people to dial down their use of electricity to decrease the load on the grid. On Monday evening, it claimed there was a 26.5% drop in consumption in the capital and surrounding region, compared to an average autumn day.

The company urged users to keep consumption low during peak evening hours, and said it ordered operators in Kiev, Chernigov, Zhitomir, and Cheboksary to introduce rolling blackouts, which will be in force for several days.

Issues with basic utilities such as electricity and water were reported by Ukrainian media in many parts of the country following the strikes.

Moscow states that the strikes were in retaliation for what it described as a series of “Ukrainian terrorist attacks” on Russian infrastructure. Key facilities were damaged in nearly a dozen Ukrainian regions, according to Kiev. (Source.)

Secondly, the deal that Turkey recently helped broker to allow Ukraine wheat to be exported through the Black Sea may now be in jeopardy, which could lead to rising food prices globally.

Wheat prices jumped nearly 8% on Monday on news of explosions in the Ukrainian capital and other cities, trading data shows. According to analysts who spoke to Bloomberg, the rising prices are due to the escalation in the conflict between Moscow and Kiev, which has placed the Ukraine grain deal, due to expire in about a month, in jeopardy.

“The beginning of the week could be very nervous with the risk of increased tensions in the Black Sea basin,” Paris-based analytics firm Agritel told Bloomberg in a note.

The missile strikes on various cities across Ukraine, including Odessa, one of Ukraine’s largest grain export hubs, came two days after an attack on the Crimean Bridge, a key link between mainland Russia and the Crimea Peninsula. Moscow has blamed the blast on Ukraine.

According to analysts, any impediment to Black Sea grain exports would propel global prices for food staples higher. (Source.)

Are Americans Finally Waking up to the Corporate Media Lies on the Ukraine War?

There are some signs that the Wall Street Billionaires and Bankers who control the Corporate Media are starting to lose the battle over the propaganda they want the American people to believe about the Ukraine War.

An American professor, Jeffrey Sachs, made waves in recent days by challenging some of the Corporate Media narratives on the war.

Professor Jeffrey Sachs stated Sunday that the U.S. should be demanding that Ukraine stops shelling the Zaporizhzhia nuclear power plant and blaming it on Russia, otherwise the world will face a nuclear armageddon on two fronts.

The power plant in southeastern Ukraine has been under the control of the Russian military since early March, however, it has continued to be operated by Ukrainian staff.

The plant has come under sustained shelling in recent days, with the Ukrainian government blaming Russia.

“It is almost surely Ukraine shelling the power plant and we can’t bring ourselves to express a simple truth and that hurts because they continue to shell the power plant with impunity,” Sachs further declared.

“We don’t know ever with our government what is really going on because they don’t tell the truth,” he further warned, adding “That just goes with the business of government, the way that it is viewed in Washington.”

Sachs urged that “This country is a war machine,” adding “Eisenhower told us about it with the military-industrial complex speech.”

“The main job of the president of the United States is to stop the war machine from making wars. And we are now in an escalation, heading towards Armageddon, according to the president,” Sachs further stated, referring to Joe Biden’s much criticised comments last week.

“That’s not a spectator sport, that’s his job to keep us away from Armageddon,” Sachs asserted.

Sachs made headlines earlier this month when he said that in his opinion the U.S. was behind the sabotage of the Nord Stream pipelines. (Source.)

A 14-minute YouTube clip from the official Joe Rogan Experience channel interviewing “Libertarian movement star commentator Dave Smith” has gone viral this week, reaching almost 5 million views at the time I am writing this article, and it also challenges the Corporate Media narrative on the Ukraine war.

The United States has sent $16 BILLION in military aid so far to Ukraine, with seemingly no end in sight, and this fact alone may be starting to sour some Americans on the Corporate Media propaganda that somehow this war is in the “best interests” of the U.S.

A new poll suggests that many Americans are growing weary as the US government continues its support of Ukraine in its war with Russia and want to see diplomatic efforts to end the war if aid is to continue. (Source.)

The natural question to ask, therefore, is why is the Corporate Media publishing propaganda and lies about the Ukraine-Russia war?

What do they stand to gain from controlling the narrative to make it look like Russia is suffering, when in fact it appears that the truth is closer to the fact that it is Ukraine and Western Europe that is suffering the most from this conflict?

The Globalists who control Wall Street and the Banks always profit from wars, and as we have reported here at Health Impact News, their real enemy in this conflict is not just Russia, but Germany and Western Europe and their ability to historically purchase cheap energy and food from Russia, which is a threat to the United States and their goals of remaining the world’s sole “Super Power” to control these assets. See:

The Globalists who control the U.S. actually want Europe to fall, and so they have to control the narrative as long as possible to make it look like everything is Russia’s fault, and that Russia must be stopped at all costs.

If they begin the realize that too many people are waking up to the truth, what might we expect next?

I think that maybe we have a clue based on what U.S. President Joe Biden said (or read from his script) last week at a Democratic fundraiser:

“We have not faced the prospect of Armageddon since Kennedy and the Cuban missile crisis. I don’t think there is any such thing to use a tactical nuclear weapon and not end up with Armageddon.”

The “nuclear threat” is being thrown out there from both sides obviously, but please do not swallow the propaganda that this is all Russia’s fault, which could prevent you from considering the possibility that the U.S. might be the first one to use nuclear weapons, even against its own “allies,” and then blame it on Russia in order to escalate the war to a whole new level.

Get ready for a long, cold winter with potential electrical grid blackouts, especially if you live in Europe.