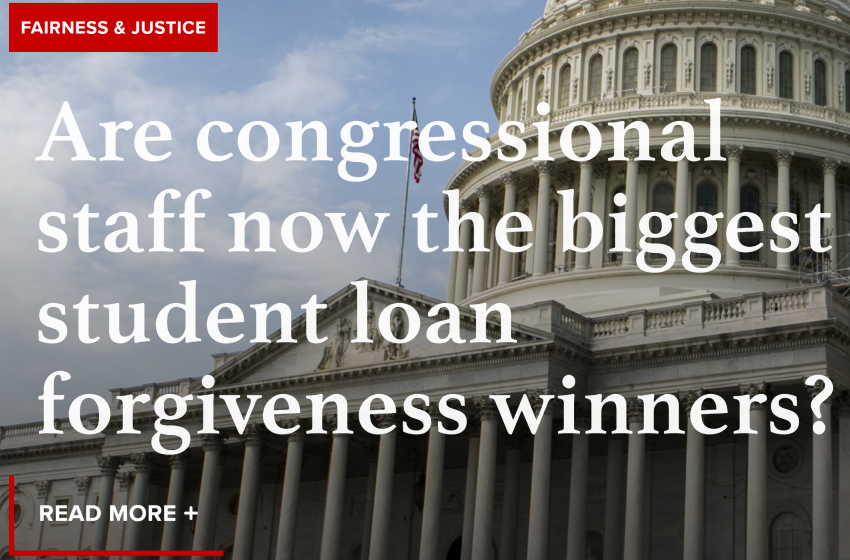 First, the question was whether student loan forgiveness should be done and then whether doing so  would be legal . Now, even though the answer to the latter question is “probably not,” the major question is whether anyone will have standing to sue to stop forgiveness from going through.

A leading candidate would be either the House or Senate, but that’s only a possibility if Republicans take control of one of the chambers in January and loans have not already been forgiven by then. Even if both of those conditions were to be met, however, Republican members may still have to convince some of the greatest beneficiaries of the program: their staff.

This week, the Department of Education updated its evolving guidance on how loan forgiveness will be administered to address a little-covered provision: that those who voluntarily made payments during the ongoing pause on student loan payments will receive that money back in addition to the up-to $20,000 in forgiveness.

The Department clarified the mechanics of this refund process by noting that “refund requests can only be made by you and refunded to you, even if someone else made a payment on your loan.” This will add complexity in cases where a parent or other family member helped a borrower repay loans during the pandemic, but perhaps even more so in the case of employers repaying loans.

These arrangements are not very common overall. Only 42% of employers provide any kind of education benefits according to SHRM , and presumably the vast majority of these arrangements fund job-relevant training rather than repayment of old loans. Nonetheless, one group of employers has been known to quite frequently offer loan repayment as a benefit: members of Congress. As Politico reported recently, these benefits are widely utilized and “nearly 2,000 Hill staffers are enrolled. . . . The House recently increased the lifetime limit of the benefit to $80,000 from $60,000.” Likewise, executive branch staff working under President Joe Biden may also be eligible for up to $60,000 in relief .

Politico also noted that “the vast majority of Hill staff make under the $125,000 threshold set by the White House, making them eligible for $10,000 in federal debt cancellation and another $10,000 if they were Pell Grant recipients.”

But the guidance this week from the Department of Education means that House and Senate staff could see thousands of dollars of additional relief from this program for payments made since March of 2020, all tax free. Since these staff work for the federal government, taxpayers are paying for their forgiveness twice.

While all of this is a great deal for staff, it’s important to consider what might happen if Republicans take control of one of the chambers in January. Will House and Senate staff, especially on the Republican side, be able to ignore the benefits they stand to receive as their bosses decide what to do next?

This article originally appeared in the AEIdeas blog and is reprinted with kind permission from the American Enterprise Institute.

Sign up now to get the Washington Examiner’s breaking news and timely commentary delivered right to your inbox.
OPINIONBELTWAY CONFIDENTIALBLOG CONTRIBUTORSOPINIONSTUDENT LOANSCONGRESS
Share your thoughts with friends.
Share on: