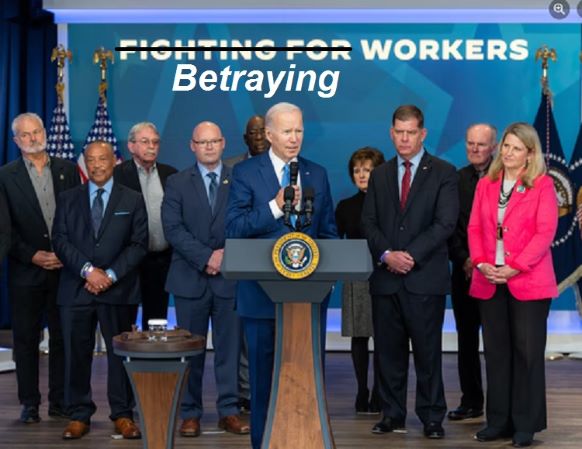 BIDEN IS THE FAMOUS BOLD-FACED LIAR. DO YOU THINK 81 MILLION FOLKS VOTED FOR HIM?

After betraying the U.S. Railroad Unions last week by forcing them into a labor agreement they did not want, the Biden Administration announced $36 BILLION bailout of pensions with 350,000 union members, including many truck drivers.

The funds are part of $80 billion for multi-employer pension funds included in the American Rescue Plan, which was approved in 2021 to help stave off the fiscal impact of the COVID-19 pandemic. Some of those funds will be used to shore up the Teamsters’ Central States Pension Fund, which includes employees and retires in more than 1,000 companies.

“… today, my administration is announcing that $36 billion of that money was going to — going to prevent the drastic cuts to workers’ hard-earned pension benefits — cuts that had been scheduled to occur within the next few years,” said Biden during a ceremony Thursday. “That’s not going to happen. The cuts are not going to occur.”

Biden said union workers and retirees were facing cuts of up to 60% of their benefits, starting in the next few years. That, said Biden, means some folks would have lost as much as $10,000 each year of their retirement.

“Instead,” said Biden. “Thanks to today’s announcement, tens of thousands of union retirees and workers in states like Ohio, Michigan, Texas, Minnesota, Wisconsin, Missouri can go to bed tonight knowing their pension they worked so damn hard for is going to be there for them when they need it.”

The announcement comes just days after some unions criticized the self-proclaimed pro-union president for signing legislation that imposed a contract settlement on the nation’s freight railroad workers. (Source.)

I wonder how many union members will actually sleep soundly after this promise by President Biden? Will that money actually be there when they retire, and if so, what will its value be?

The big financial news of the past week came out of Switzerland and the Bank for International Settlements (BIS) which reported that there are $80 trillion of hidden, off-balance sheet dollar debt in FX swaps (derivatives).

The BIS, dubbed the central bank to the world’s central banks, also said in its latest quarterly report that 2022’s market upheaval had largely been navigated without major issues.

Its main warning concerned what it described as the FX swap debt “blind spot” that risked leaving policymakers in a “fog.”

The $80 trillion-plus “hidden” debt estimate exceeds the stocks of dollar Treasury bills, repo, and commercial paper combined, the BIS said. It has grown from just over $55 trillion a decade ago, while the churn of FX swap deals was almost $5 trillion a day in April, two thirds of daily global FX turnover.

For both non-U.S. banks and non-U.S. “non-banks” such as pension funds, dollar obligations from FX swaps are now double their on-balance sheet dollar debt, it estimated.

“The missing dollar debt from FX swaps/forwards and currency swaps is huge,” the Switzerland-based institution said, adding the lack of direct information about the scale and location of the problems was the key issue. (Source.)

Shortly after this report was issued, analysts at BlackRock stated that we should “get ready for a recession unlike any other,” and that Central Banks will not be able to bail out everyone.

A worldwide recession is just around the corner as central banks boost borrowing costs aggressively to tame inflation — and this time, it will ignite more market turbulence than ever before, according to BlackRock.

The global economy has already exited a four-decade era of stable growth and inflation to enter a period of heightened instability — and the new regime of increased unpredictability is here to stay, according to the world’s biggest asset manager.

That means policymakers will no longer be able to support markets as much as they did during past recessions, a team of BlackRock strategists led by vice chairman Philipp Hildebrand wrote in a report titled 2023 Global Outlook.

“Recession is foretold as central banks race to try to tame inflation. It’s the opposite of past recessions,” they said. “Central bankers won’t ride to the rescue when growth slows in this new regime, contrary to what investors have come to expect. Equity valuations don’t yet reflect the damage ahead.”

“What worked in the past won’t work now,” the strategists said. “The old playbook of simply ‘buying the dip’ doesn’t apply in this regime of sharper trade-offs and greater macro volatility. We don’t see a return to conditions that will sustain a joint bull market in stocks and bonds of the kind we experienced in the prior decade.” (Source.)

The 2nd Smartest Guy in the World blog gave a much more detailed account of the BIS report than what you will probably read in the corporate media.

The world faces a staggering financial meltdown with potential losses exceeding the total number of US dollars in circulation.

2nd Smartest Guy in the World

The Bank for International Settlements (BIS) is the central bank of central banks that for all intents and purposes directs all of the other various central banks from The Federal Reserve to the ECB to the BOJ.

The BIS is like the One World Government central bank to the various sovereign national central banks that appear to be independent, but are all privately owned and actively working against the interests of their respective nations.

The BIS is like the hyper-centralized control center, and the various national central banks are its “penetrator” nodes.

All of the national central banks will deploy their respective CBDC products to coincide with the imminent global financial crash to end all crashes. These CBDCs will be the opening salvos in the Great Reset. At some point yet another manufactured crisis will consolidate all of the various CBDC’s into a supra-crypto-SDR (Special Drawing Rights) CBDC that will function as the singular planetary digital currency, at which point the national central banks will all be consolidated into the BIS.

In the meantime, the BIS is carefully seeding and normalizing their upcoming PSYOP-MARKET-CRASH:

Some say there are tens of trillions of shadowy derivatives, while other believe the real number is in the quadrillions. These derivatives are off balance sheet, meaning that they are essentially rehypothecation instruments of financial mass destruction.

In 2004 the BIS estimated around $20 Trillion of these derivatives, and today their estimate has quadrupled, with the total value of all derivates believed to be $100 Trillion. These are conservative estimates, with the real numbers most likely multiples higher.

The BIS is now telegraphing this $100 Trillion dollar problem as FX swaps are being refinanced at much higher interest rates, and those borrowing in dollars (e.g. Japan, Europe and the UK) have seen their currencies dramatically devaluated against the greenback.

The dollar represents 80% of these derivatives, with said liabilities due within the year as per the BIS’ Quarterly Review:

Coming up soon! The #BISQuarterly Review will be out today at 1300 CET, with new analysis and insights from our unique global data set on foreign exchange and derivatives markets #BISTriennialSurvey #FX #Derivativeshttps://t.co/Pb939SiG2T pic.twitter.com/ztavVSGX4J

From the Quarterly Review:

• FX swaps, forwards and currency swaps give rise to dollar obligations that were backstopped in 2008 and 2020 by central banks acting on little information about who owed the debt.

• In mid-2022, non-US banks with direct access to Federal Reserve credit only in their US operations owed an estimated $39 trillion in dollars from FX swaps, forwards and currency swaps.

Note the admission that central banks were, “acting on little information about who owed the debt.” And the keywords huge, missing and growing do not exactly instill confidence in central banks given the outsized role that these murky derivatives play in the global financial system.

The below video is must see if you want to appreciate just how badly this next crash may be:

A companion article from the Express.co.uk entitled, ‘It’ll wipe out every dollar in the world’ – new crash fears as $80trillion ‘goes missing’ states the following:

Now they are warning of a crash the scale of which we have never seen before, with a staggering $80trillion (£65trillion) at stake.

To put that into perspective, the global financial crisis was triggered by the collapse of Wall Street investment bank Lehman Brothers in September 2008.

That was the largest corporate bankruptcy in US history but its debts totalled “just” $619 billion. That is less than one percent of the sums at stake today.

One global financial expert contacted by Express.co.uk said a hidden corner of the finance world has been stretched to an “unsustainable” point, leaving the world in a “dangerous position”.

It is yet another sign that global finance has got far too big for its boots, leaving the world at its mercy.

Precisely because the stock markets and the debt supercycle were purposely designed to be untenable well over a hundred years ago by the architects of this global financial system.

Terrifyingly, the $80trillion-plus “hidden” debt estimate is greater than the total stocks of US dollar Treasury bills, repo and commercial paper in circulation combined, BIS said.

In other words, it’s bigger than the mighty dollar.

It has grown from $55trillion to $80trillion in a decade, with daily FX swap deals totalling a massive $5 trillion a day.

Non-US banks and pensions funds have twice as much FX swap dollar obligations as the amount of dollar debt that is listed on their balance sheets.

Yet nobody knows where this debt is and how much it is worth in total.

PSYOP-MARKET-CRASH will be so terrifying that the likes of the BIS, the various central banksters, WEF, UN, et al. will conveniently swoop in with their CBDC solutions to the very problems that they created in the first place.

And the liabilities are far bigger than the almighty dollar precisely because all fiat currencies will be wiped out in order to usher in the One World Government social credit score tethered CBDC hell on earth dystopia.

Read the full article at 2nd Smartest Guy in the World