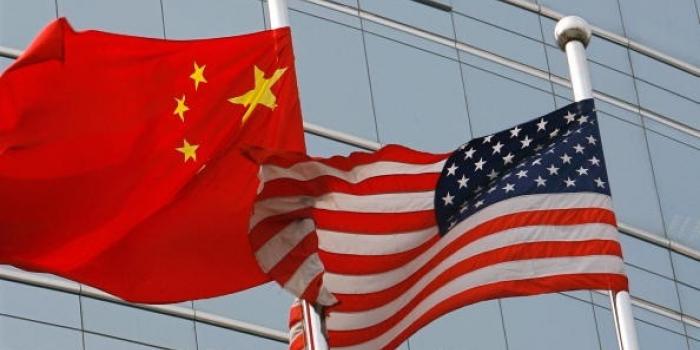 OBIDEN IS A BOLD FACED LIAR – Chinese and U.S. national flags fly in Beijing. (File photo by Teh Eng Koon/AFP via Getty Images)

(CNSNews.com) – Ahead of Monday evening’s closely watched virtual meeting between President Biden and Chinese President Xi Jinping, Beijing is making clear that the dispute over Taiwan is its top concern, and that it will allow no middle ground on the issue.

“Any connivance of and support for the Taiwan independence forces undermines peace across the Taiwan Strait and would only boomerang in the end,” Chinese Foreign Minister Wang Yi told Secretary of State Antony Blinken in a preparatory call over the weekend.

A Chinese foreign ministry readout on the call said Wang had stressed Beijing’s “solemn position” on Taiwan in response to “recent wrong words and deeds” by the United States.

China views as “wrong signals” such U.S. actions as expressions of support for Taiwan’s thriving democracy, visits by lawmakers, calls for Taiwan’s meaningful participation at the United Nations and other multilateral bodies, defensive arms sales, U.S. Navy vessels transiting the Strait, and criticism of Chinese military activities in the area.

The Taiwan question dominated the Chinese statement, which was silent on other pressing issues in the bilateral relationship, apart from a passing reference to an exchange of views on issues including energy security and climate change, along with a vague mention of “all kinds of global challenges.”

A State Department readout of the Blinken-Wang call said the secretary had “emphasized longstanding U.S. interest in peace and stability across the Taiwan Strait and expressed concern regarding the PRC’s continued military, diplomatic, and economic pressure against Taiwan.”

“He urged Beijing to engage in meaningful dialogue to resolve cross-Strait issues peacefully and in a manner consistent with the wishes and best interests of the people on Taiwan,” it added.

In an editorial looking ahead towards Monday’s talks, the Chinese Communist Party mouthpiece Global Times described the Taiwan issue as “the ultimate red line of China.”

“Washington must understand that it has gone too far, leaving China with no way back,” it said. “It also needs to see that it is the only one that should take a step back to keep the forces between China and the U.S. at a safe distance.”

Blinken has spoken repeatedly this year about the relationship with China having competitive and adversarial elements but also potentially collaborative ones.

The State Department statement said he had done so again while talking to Wang, saying the Biden-Xi meeting “presents an opportunity for the two leaders to discuss how to responsibly manage competition between the United States and the PRC while working together in areas where interests align.”

Some U.S. lawmakers and activists are urging Biden to raise during the talks not just the Taiwan tensions but also the CCP’s mass-scale repression of minority Muslims in Xinjiang, the stifling of democracy in Hong Kong, and recent troubling military developments.

Biden and Xi have held two phone conversations since the former took office, but a face-to-face meeting has been ruled out since Xi has not traveled beyond his country’s border since the coronavirus outbreak emerged in Wuhan in late 2019.

Although Monday’s video call is expected to be more significant than the previous conversations, the term “summit” appears to have quietly been dropped.

Biden in Glasgow on November 2 said he would be having a “virtual summit” with Xi, and White House press secretary Jen Psaki used the word again during Friday’s briefing in connection with the meeting.

But in official statements the White House and State Department are both now calling the interaction a “virtual meeting.”

Psaki said Friday Biden and Xi would “discuss ways to responsibly manage the competition between the United States and the PRC, as well as ways to work together where our interests align.”

She said the administration was not seeking “specific deliverables or outcomes” from the meeting. Rather, Biden aimed to set the terms for effective competition “and also discuss areas where we can work together.”

Asked whether the president would bring up claims that China is hampering investigations into the origins of the coronavirus outbreak, Psaki said it remains an issue of concern, “and the president is certainly not going to hold back on areas where he has concern.”

A reporter asked Psaki whether Biden believes the time he and the Chinese leader have spent together in the past will “have an impact on his ability to engage with Xi Jinping and get China to take actions that it’s been reluctant to take so far.”

“He feels that the history of their relationship – having spent time with him – allows him to be quite candid as he has been in the past and he will continue to be,” she replied.

Biden has spoken frequently about how much time he spend with Xi when both were vice presidents, after President Obama tasked him to engage with the up-and-coming Chinese leader before he assumed the top post.

“I probably spent more time with Xi Jinping, I’m told, than any world leader has because I had 24, 25 hours of private meetings with him when I was vice president. Traveled 17,000 miles with him,” he told CBS News last February. “I know him pretty well.”