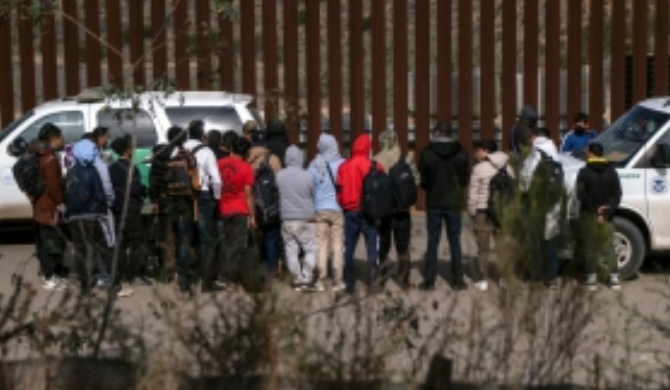 A border patrol agent talks to a group of migrants, mostly from African countries, before processing them after they crossed the US-Mexico border, taken from Tijuana, Baja California state, Mexico, on November 11, 2022. (Photo by GUILLERMO ARIAS/AFP via Getty Images)

“They are desperate for resources, so what they have done is they’ve tried to backfill positions at the border patrol with air marshals, but these aren’t law enforcement functions. I want to make that clear. They are sending air marshals who are highly trained federal law enforcement officers to the border to do menial tasks,” she told “Fox and Friends.”

Labosco said that the air marshals would not be used to detain migrants trying to cross the border. Instead, they would be given a desk job at the border.

“They’re very menial tasks. They are transportation to the hospital, hospital watch – nothing that would have any effect on what their current, highly trained status would be in the aircraft working at 35,000 feet. You have to be an excellent marksman,” she said.

“We have the highest standards for federal law enforcement when it comes to qualifications with our firearms, so you’re taking a highly skilled air marshall and then you’re putting him on the border basically doing details that an NGO or a contractor could do,” Labosco added.

A DHS spokesperson told Fox digital on Wednesday, “Federal Air Marshals have long supported various Departmental operations on a regular basis across Democratic and Republican administrations alike. There is nothing new or unique about this.”

However, Labosco disputed this assertion.

“They are not right. They are not right. They have never — there has never been a forced deployment? We have always had some air marshals that would volunteer, who were prior military or law enforcement background, who are comfortable working in those atmospheres, right? Because you need to know about prisoner transport,” she said.

“There’s a lot of different things that you need to know whether you are on — like basically on street cop on the ground vs. working at 35,000 feet. So, dhs is incorrect about that. They are trying to force the air marshals off the planes and down to the border,” Labosco said.

Deploying air marshals to the border goes against the federal statute, she said.

“Also, we believe with our legal counsel, with our attorney that they are out of their statutory authority that was given to them by Congress after 9/11, in the deployment of federal air marshals. Federal air marshals are only by statute allowed to be deployed in national transportation domains, and that’s period. There are no exceptions,” Labosco said.

Federal air marshals have already been retiring at a high number this year, and Labosco predicts they will see a record number of retirements next year.

“We are not — we do not have enough air marshals, Pete. We are 21 years into the deployments that we’ve had since 9/11, and a lot of our air marshals have met their 20-year mark. We have seen a high number of retirements throughout this year – 2022,” she said.

“We’re gonna see a record number of retirements in 2023, and our agency is simply not hiring to replace those air marshals. So we are not at a high number already currently in our staff,” Labosco said.

Florida AG: Border Enforcement Is ‘One of the Most Important Issues Facing the Stability of Our Country and Our States’

McCarthy: ‘I Think the Administration Got an Indication It’s Going to Be Different’ with GOP-Led House
Share on: