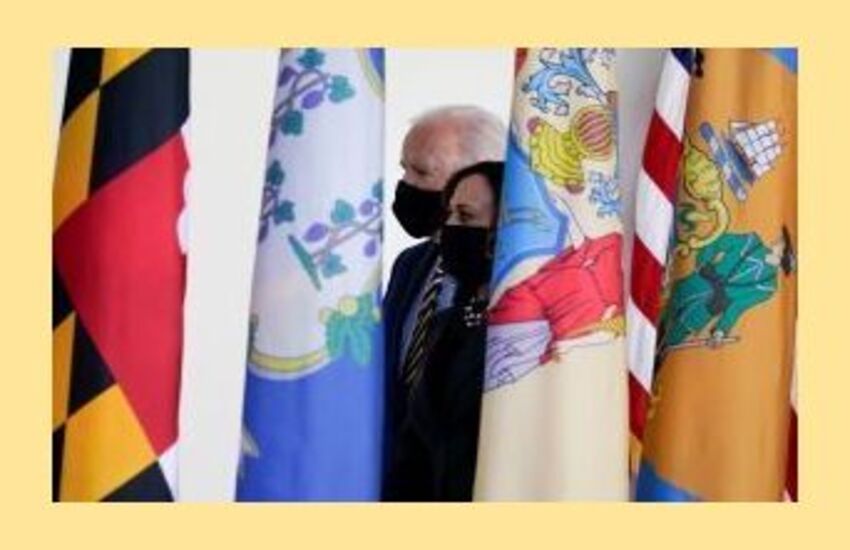 When President Biden meets Asian American families in Atlanta Friday, Vice President Kamala Harris will be at his side — just as she was throughout Thursday in the Oval Office to receive the president’s daily intelligence briefing, followed by an update on the COVID-19 response, the weekly economic briefing, and then standing behind the commander in chief as he delivered a speech to the nation on vaccination delivery.

It makes for a very public display of togetherness from an administration that styles itself Biden-Harris at every opportunity.

And in doing so, historians see an effort by a leader modeling the relationship on his own time as vice president and setting up his deputy to be his most important and visible surrogate.

“He’s making a very public show of this,” said Joel Goldstein, a St. Louis University professor and a leading expert on the vice presidency. “That’s important to credentialize her, to send the message that she is important.”

“That provides the foundation so she can perform as an important surrogate for Biden and really expand his capacity by meeting with foreign leaders and so forth,” he added.

ACROSS THE STREET AND OVER HIS SHOULDER: HARRIS SHARES LIMELIGHT WITH BIDEN

On Wednesday, she met virtually with the Irish prime minister and, earlier in the week, traveled west — to California, Nevada, and Colorado — to tout the benefits of the $1.9 trillion American Rescue Plan. A day later, the president slipped and referred to her as the commander in chief.

“This is really important,” Biden said of the country’s immunization effort. “Because we believe in speed and efficiency must be matched with fairness and equity. Now when President Harris took a virtual tour of a vaccination center in Arizona not long ago, one of the nurses on that tour – injecting people, giving vaccinations said that each shot was like administering a dose of hope.”

That verbal fumble comes as vice president’s popularity has increased along with her visibility. Her approval rate passed 50% for the first time this year, according to polling by Gallup, from a low of 29% two years earlier.

Critics see an aging president grooming his deputy to take over the top job in 2024 — or earlier. And the claim was a frequent favorite of former President Donald Trump on the campaign trail last year.

At a rally in September, he raised a scenario in which Biden was too frail to carry out his duties. “I’m getting tired. I’d like to rest,” he said, pretending to be Biden. “I’d like to let Kamala take over as president.”

But White House watchers see a president who views his time under Barack Obama as the model for a vice president integrated into a chief executive’s inner circle.

Costas Panagopoulos, professor of political science at Northeastern University, said: “There is considerable variation across administrations in terms of vice presidential involvement, but Biden clearly falls closer to the fully integrated end of the spectrum.”

Biden this week talked about his close relationship with Obama.

But their relationship did not always work like that. The 36-year Senate veteran with a touch of the Irish blarney and the on-message, one-term senator took time to warm to each other.

The young president sometimes referenced their teething problems in public. At his first press conference, when Obama was asked about Biden’s comments that there was a 30% chance that the administration could get the economic stimulus wrong, he replied: “I don’t remember exactly what Joe was referring to … not surprisingly.”

But by the end of their time in office, Obama presented Biden with the nation’s highest civilian honor, the Presidential Medal of Freedom, and the vice president asked the president to deliver the eulogy for his son Beau in 2015. The then-VP called his then-boss an “honorary Biden.”

“They had to really learn to appreciate each other,” said Goldstein. “So at the end of the relationship, you have all these signs of a really close relationship.”

In the same way, Biden and Harris did not know each other well, and clashed memorably over race during the Democratic primary debates, before they teamed up. Spending time together, being briefed together, and appearing onstage together is a way to build that relationship.

“With Biden and Harris, you have two people who haven’t known each other much before. They are 20 years apart in age, different life experiences, and so forth,” said Goldstein. “Building a relationship — how do you do that? By being together, by working together.