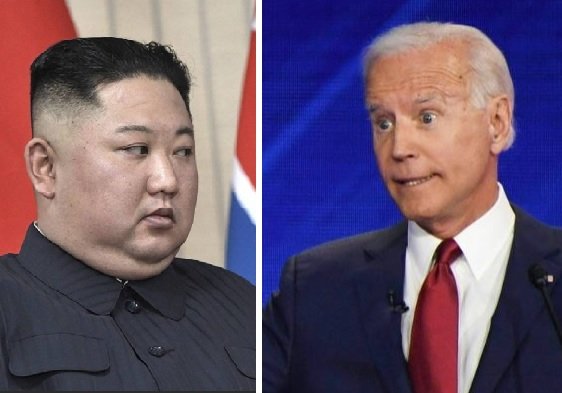 Because of Joe Biden’s big mouth, several of our enemies spent last week saber-rattling and humiliating the US.

North Korea conducted a missile test over the weekend, the first to occur since Joe Biden took office.

According to Reuters, Pyongyang fired two short-range missiles over the weekend in a challenge to Joe Biden after his triple-fall going up the steps to board Air Force One.

Two senior officials of the Biden administration told reporters in a briefing call the North Korean activity involved weapons systems at the low end of the spectrum that were not covered by U.N. Security Council testing bans.

Pyongyang fired off the missiles over the weekend after it was reported that North Korea is not responding to any behind-the-scenes diplomatic outreach by Biden’s Admin, according to Reuters.

“To date, we have not received any response from Pyongyang,” a senior Biden official told Reuters.

Last week Kim Yo Jong, the sister of North Korean leader Kim Jong Un warned Joe Biden against “causing a stink” if the US wants to “sleep in peace” as Secretary of State Antony Blinken visited the region.

Kim Yo Jong threatened Biden in a first public comment directed toward the Biden Administration.

She said North Korea took “this opportunity to warn the new U.S. administration trying hard to give off powder smell in our land.”

“If it wants to sleep in peace for the coming four years, it had better refrain from causing a stink at its first step,” she added, according to KCNA.

Joe Biden was asked about North Korea Tuesday night after he returned to the White House from his trip to Ohio.

“Do you consider that to be a real provocation by North Korea?” a reporter asked Biden.

“No. According to the Defense Department, it’s business as usual. There’s no new—there’s no new wrinkle in what they did,” Biden said.

“Will it affect diplomacy at all?” the reporter asked in a follow-up question.

Biden laughed at the question and walked away.

REPORTER: On North Korea: Do you consider that to be a real provocation by North Korea?

BIDEN: No. According to the Defense Department, it’s business as usual. There’s no new—there’s no new wrinkle in what they did.

REPORTER: Will it affect diplomacy at all?