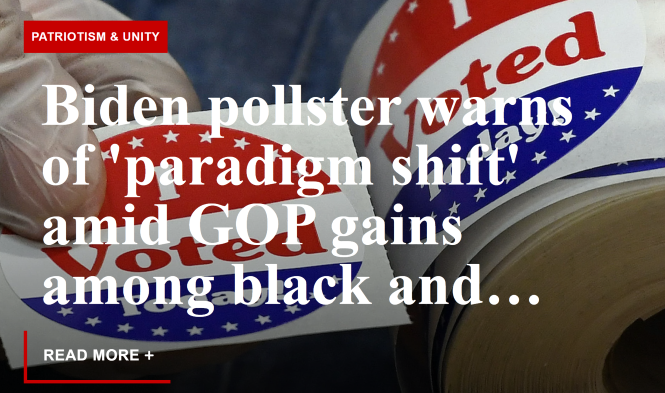 Republicans are faring better with black and Latino voters going into Election Day, a shift that threatens to scramble predictions of a growing Democratic majority bolstered by minority votes.

While black and Latino voters have historically backed Democrats by overwhelming margins, new polling points to a worrying trend for Democrats as the party seeks to hold on to power on Tuesday and in the years ahead.

About 17% of black voters said they intended to vote Republican on Tuesday, according to the latest Wall Street Journal poll . In 2018, just 6% backed Republican candidates, a Pew Research Center analysis showed. AP VoteCast had former President Donald Trump at 8% in 2020, with the exit polls at 12%.

DEMOCRATS ‘DID NOT LISTEN’ TO VOTERS, WARNS PARTY STRATEGIST

With Latino voters, Democrats’ advantage has slimmed to 5 percentage points following an 11-point lead in August . The shift is most pronounced among working-class voters who favored Democrats by 6 points, compared to 26 points for Latino voters with college degrees.

In 2018, 33% of Hispanic voters backed a Republican candidate, compared to 64% who supported a Democrat, a 31-point difference, according to the Associated Press-NORC VoteCast survey .

Tuesday’s results could upend years of underlying assumptions about the direction of black and Latino voters if the trend holds, John Anzalone told the Wall Street Journal.

Anzalone was President Joe Biden’s lead pollster in 2020 when he won Hispanic voters by a 28-point margin over Trump.

The findings come as Democrats fight for survival in states the party sees as pivotal to their chances of holding the Senate next year, as well as winning over Latino voters in future elections.

Her opponent, Republican Adam Laxalt , entered the final week of the race favored to win, according to a forecast by FiveThirtyEight.

Sign up now to get the Washington Examiner’s breaking news and timely commentary delivered right to your inbox.
MIDTERMS 2022NEWSDEMOCRATIC PARTYREPUBLICAN PARTYLATINOSNEWS
Share your thoughts with friends.
Share on: