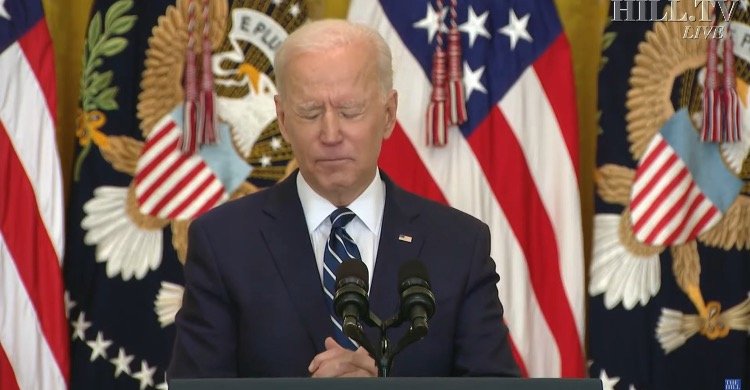 The verdict is in and Joe Biden’s first press conference was a colossal catastrophe.

To be honest, after stealing the 2020 election, there wasn’t much that Biden could have done or said to appease the 80 million Americans who he stole the election from.  But then again he didn’t want to.

As we noted already, Biden lied throughout the presser and laughed and mocked President Trump.  This didn’t work for Obama who won the 2008 election, it sure wasn’t going to work for Biden who stole the 2020 election from the man he mocked:

But Biden’s lies and attacks of President Trump were only the beginning of the disaster.  Even before the event, far-left ‘activist’ Maggie Haberman from the New York Times was fearful of another Biden blunder:

President Joe Biden appeared to read off a pre-written list as he called on various reporters during his first formal press conference in office.

Fox News reporter Peter Doocy called out President Joe Biden for not taking questions from him in his first White House news conference.

After Biden’s wrapped up his question-and-answer time on Thursday, Doocy beamed into Fox News midday show America Reports, as a panel critiqued the president over several elements of his performance. Much of the discussion centered around whether Biden received sufficient scrutiny, and when Doocy appeared, John Roberts noted the fact that Biden didn’t call on him to ask a question.

“I mentioned last night, I had a binder full of questions,” Doocy said. Sure enough, he pulled out a binder on camera to show people he “was not kidding.”

Even far-left Trump-hater Chris Wallace was shocked at Biden’s performance:

I have to say I was also struck by the fact that it seemed on every foreign policy question, not the others but on foreign policy, he went to his briefing book like Jen Psaki does sometimes in the briefings and was reading what was obviously White House guidance, White House talking points,” he said.

Wallace then put his comments in proper historical perspective, saying “covering Ronald Reagan for six years I never saw that. Watching a lot of news conferences over the years I have never seen that, a president at a news conference reading talking points. He did that on it seemed every foreign policy question.”

Everyone knows a few things: