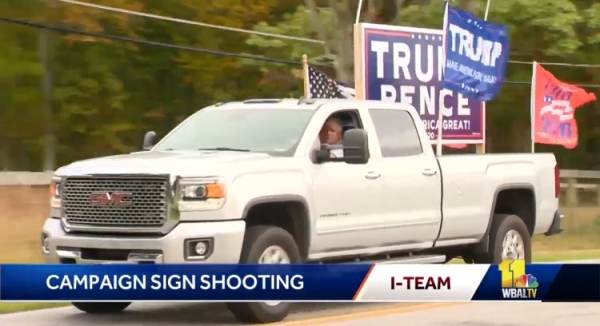 Kingsville, Maryland – A Biden supporter on Saturday was arrested and charged for firing a shotgun at 2 Trump supporters driving by his property.

The Biden supporter, 50-year-old Douglas Kuhn, was reportedly putting up a Biden 2020 sign on his yard when a father and son drove by in a truck with Trump 2020 flags and honked.

The Trump supporters, Neal Houk and his son, Bradley Lang, sped off and called police.

According to reports no one was injured and the truck was not damaged.

Trump supporters Neal Houk and his son, Bradley Lang, called it a neighborly act, a friendly honk to a Biden supporter they spotted putting up a Black Lives Matter sign.

“It’s Kingsville, it’s a friendly area. Everyone honks at each other. We think we were hoping there could be some civility between people who support different candidates,” Lang said.

Police said Kuhn picked up a shotgun and discharged it as the truck drove by. The victims drove to a safe location and called police. No one was injured and the truck was not damaged.

“We were looking right down the barrel of a shotgun,” Houk said.

“He picked up a shotgun from near his feet and ran towards us aiming it and we got 100, 200 feet down the road, he began to fire,” Lang said. “We were scared, although we were happy that he missed, the truck was missed and we were alright.”

Kuhn allegedly initially told everyone that he had a shovel, not a shotgun in his hand. There are witnesses who say otherwise.

Police arrested Kuhn and charged him with first-degree assault, reckless endangerment and using a firearm in the commission of a crime. Police said officers confiscated two firearms from Kuhn’s property.

The judge assigned to the case was furious and scolded the shooter.

“How did it get to the point where he pulls out a shotgun? What has the world come to? This is beyond belief. Free speech. Why resort to weaponry. This could have been horrible,” Baltimore County District Court Judge Philip Tirabassi said during Monday’s bail hearing.

“I would never think — especially in Kingsville — that anyone would be violent about this situation. We all play nice here. It is America,” Houk said.

“He obviously has his political beliefs, as he showed with his signs. We were expressing those same rights, and he attacked us for that,” Lang said.

Kuhn was ordered to serve home detention until his next court date.