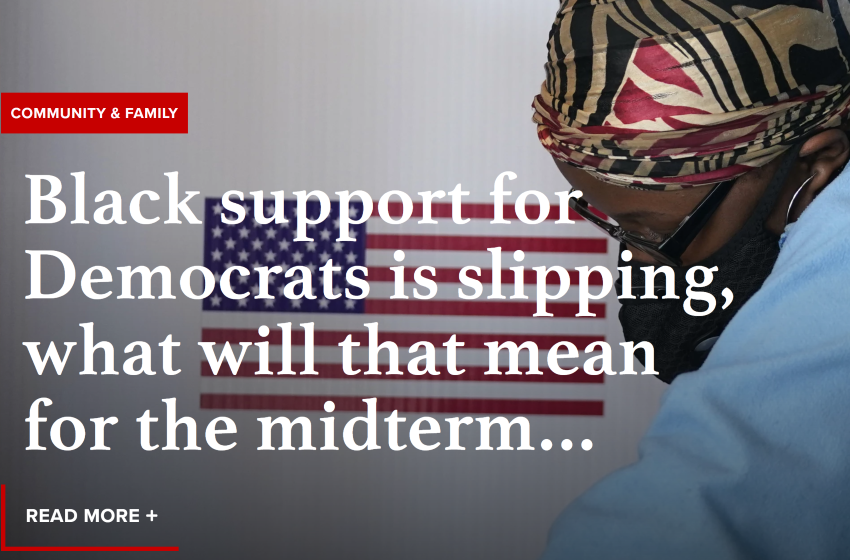 There are signs that black Americans are slowly moving away from the Democratic Party . While this shift is far less dramatic than the huge numbers of Hispanic Americans who have abandoned the party, it’s happening nonetheless. This dynamic bears close attention as the November midterm elections beckon.

And as we’ve seen repeatedly, in close elections, even a 1%-2% shift in support can mean the difference between victory and defeat. The Real Clear Politics average of polls for the generic congregational vote, which asks participants which party’s candidate they would vote for if the election were held today, currently favors Republicans by 0.9%. The final RCP average ahead of the 2020 election favored Democrats by 6.8%. Aside from a tie in one October 2019 poll, Republicans lagged in every poll included in RCP’s generic vote data.

On Friday, Rasmussen , a right-leaning pollster, reported that 66% of black respondents said they would vote for a Democratic candidate and 21% for a Republican. A decidedly more left-leaning poll from Politico /Morning Consult released on Oct. 3 found that 74% of black voters surveyed said they would prefer a Democratic candidate while 14% would choose a Republican.

For the sake of argument, let’s go with the more liberal results. Just 74% of black people would support a Democratic candidate today, yet two years ago, 92% of black people cast their ballot for Joe Biden. Likewise, 14% of black people would vote for a Republican, but only 8% voted for Trump in 2020. This does not translate into a point-for-point decline because Biden is not on the ballot. It does, however, show a distinct directional shift in voter sentiment.

A Washington Post /Ipsos poll released in May found that although the majority of black voters still support Democrats, the margin has fallen. The poll asked black voters if they thought Biden was sympathetic to their needs. Although 66% said yes, the number two years earlier had been 74%. The poll also found that Biden’s job approval was falling the fastest among younger black Americans. For those aged 18-39, it had dropped to 60%, and among those aged 40-64, to 74%. But a whopping 86% of black voters aged 65 and older still approved of his job performance.

The loss of support from this crucial voting bloc, while small, does not bode well for Democrats in the midterm elections. Just as black voters made the critical difference in states like Georgia, Pennsylvania, and Wisconsin in 2020, the loss of even a small portion of those votes could be a game changer, particularly in a close race.

As I wrote last week, barring any October surprises in the more predictable Senate races, to win back control of the upper chamber, Republican candidates need to prevail in Ohio, Nevada, North Carolina, and Wisconsin, all states where they currently lead. Plus, they need to win one race in any of the following states: Georgia, Pennsylvania, Arizona, Washington, or New Hampshire. And even a minor dip in black support for Democrats will help make that happen.

Elizabeth Stauffer is a contributor to the  Washington Examiner and the  Western Journal . Her articles have appeared at MSN, RedState, Newsmax, the Federalist, and RealClearPolitics. Follow her on  Twitter  or  LinkedIn .

Sign up now to get the Washington Examiner’s breaking news and timely commentary delivered right to your inbox.
OPINIONBELTWAY CONFIDENTIALBLOG CONTRIBUTORSMIDTERM ELECTIONSMIDTERMS 2022POLLINGOPINION
Share your thoughts with friends.
Share on: