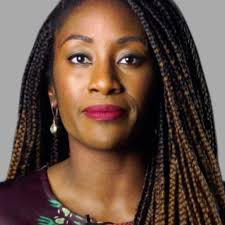 Democracy dies in darkness, but racism thrives in broad daylight at the Washington Post. Karen Attiah, Global Opinion editor for the Post, posted several racist attacks against white woman on Twitter Sunday, including one that warned white women they are lucky black people aren’t seeking revenge on them for among other grievances voting for President Trump. Attiah deleted that tweet, but tweeted and retweeted several racist tweets about white women. Attiah was born in the U.S. in 1986 to parents who immigrated from Ghana.

Attiah wrote and deleted, “The lies and tears of White women hath wrought: The 1921 Tulsa Massacre, Murder of Emmet Till, Exclusion of Black women from feminist movements, 53% of white women voting for Trump. White women are lucky that we are just calling them “Karens”. And not calling for revenge” 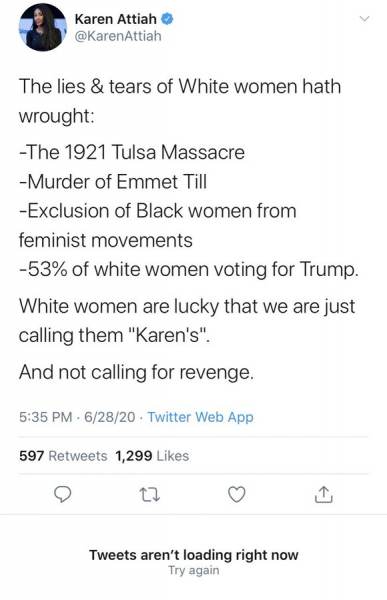 Attiah reiterated her warning in a reply that was also deleted, “I’m just saying. Be happy we are calling for equality. And not actual revenge.” 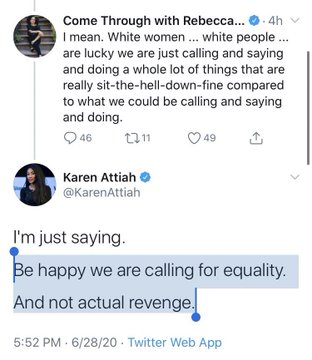 This Big Mood was just deleted, but never forgotten. pic.twitter.com/RXy529UgYm

These tweets by Attiah are still up:

“But here’s the real thing about “Karen” memes. The dark side to handwringing about how Karen” hurts white women’s feelings is that it is a distraction from how everyday white women uphold white supremacy through violence, aggression, and the weaponzing of their gender.”

But here’s the real thing about “Karen” memes.