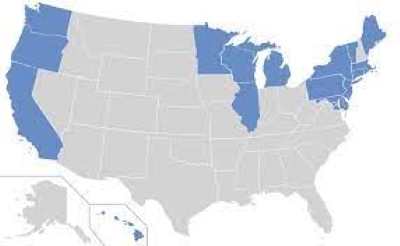 Democrats are racing to New York to fortify what was once supposed to be the blue firewall safeguarding their slim House majority.

But after a redistricting plan that went awry and a national political climate in which Republicans are reaching into the blue states for potential gains, New York Democrats need some shoring up themselves.

First lady Jill Biden is campaigning Sunday with Rep. Sean Patrick Maloney (D-NY), who, as chairman of the House Democrats’ campaign arm, is supposed to be defending their majority rather than needing to be defended himself. President Joe Biden appeared in Syracuse, New York, late last week to give a speech warning about the economic consequences of a Republican takeover on Capitol Hill.

Even the New York governor’s race has shown some signs of tightening, with a recent Quinnipiac poll showing Gov. Kathy Hochul (D-NY) leading Rep. Lee Zeldin (R-NY) by just 4 percentage points. A SurveyUSA poll for a local television station also has Hochul in front but receiving less than 50% of the vote, a danger mark for an incumbent. She is up by 7.3 points in the RealClearPolitics polling average.

At a minimum, Democratic resources will have to be devoted to New York that could be allocated elsewhere.

To Democratic strategist Brad Bannon, the New York campaign blitz simply reflects the dynamics of the race, dominated by a tension between the fragile state of the economy and the Supreme Court’s reversal of Roe v. Wade.

“It’s a good idea for the first lady to stop in New York on her tour through the Northeast,” he told the Washington Examiner. “The campaign is all about suburban women who are torn between concern about inflation and fear about the GOP efforts to restrict abortion rights.”

Republicans are making a late push through the once-safe Northeastern liberal redoubts as crime and inflation eat into the leads Democrats had hoped would be strengthened by a backlash against Dobbs v. Jackson Women’s Health Organization. But in New York, Democrats had once hoped to erase Republican-held congressional districts and lock in their majority during the redistricting process.

The 2020 census showed liberal New York City gaining population while more conservative parts of the state shrank or saw anemic growth, giving Albany Democrats a chance to redraw the map and dominate at least 22 of the remaining 26 districts, leading one elections prognosticator to predict “a bloodbath for Republicans.”

But the courts tossed this plan and instead approved a map that forced some Democratic incumbents to compete with each other.

Now New York Democrats might be paying the price, just weeks after a special election there gave the party hope nationally.

Outgoing Rep. Tom Reed (R-NY) said Democrats went too far when they tried to wipe out Republican seats in congressional redistricting, and courts were right to reject the maps.

“They overreached. The map got challenged, and they’re reaping what they’re what they sowed,” Reed told the Washington Examiner. “It’s going to be a good night for Republicans in New York. I think nine [GOP-held seats out of 26] is very realistic. They were trying to get us down to three. So that’s a six net positive from my perspective. And that goes to show you, in this business, you shouldn’t get greedy. Hogs get slaughtered, pigs live.”

The GOP wins he’s counting on are incumbent Republican Reps. Claudia Tenney, Elise Stefanik, Andrew Garbarino, and Nicole Malliotakis, as well as candidates Nick LaLota in the 1st Congressional District, Nick Langworthy in the 23rd District, Brandon Williams in the 22nd District, Marc Molinaro in the 19th District, and a potential ninth if Mike Lawler can defeat Maloney, the Democratic Congressional Campaign Committee’s chairman, in the 17th District.

Stefanik, who heads the House Republican Conference, was even more upbeat about GOP chances in New York. Currently, Republicans hold eight of the 27 New York congressional seats. With redistricting, New York goes down to 26 seats next year, and she says the GOP has a shot of winning back the House through the Empire State by itself.

“Democrats’ blue wall is going to crumble and be an ash heap in political history,” Stefanik told the Washington Examiner. “And it’s because single-party Democrat rule has failed in both Washington and Albany, so New Yorkers get a double whammy of far-left radical policies that have made our state more dangerous and have caused significant economic hardship on so many families, seniors, small businesses, farmers. We could win the majority in New York alone.”

In addition to the nine seats mentioned by Reed, Stefanik touted other GOP pickup opportunities in blue territory for George Santos in New York’s 3rd District, Anthony D’Esposito in the 4th District, Colin Schmitt in the 18th District, La’Ron Singletary in the 25th District, and Liz Joy in the 20th District.

She said the Democrats’ redistricting plan backfired, and instead, they will see a “red tsunami” in New York. Nationally, the party is defending a slim 220 to 212 House majority and lost seats in 2020.

Democrats remain confident they can at least stay afloat in the deluge.

CLICK HERE TO READ MORE IN THE ASHINGTON EXAMINER

“It will play out like the 2021 gubernatorial race in New Jersey,” Bannon, the Democratic strategist, said of the New York gubernatorial contest. “The race tightens at the end, but the incumbent Democratic governor prevails in a photo finish.”

A photo finish remains a long way from an anti-Republican bloodbath.