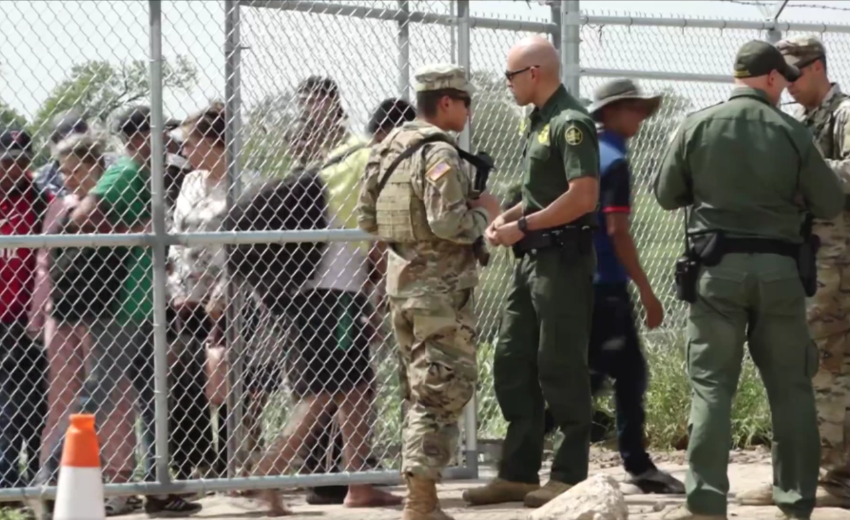 The Border Patrol’s unlocking of a fence gate on the Texas-Mexico border to let a group of illegal immigrants on private land was a violation of protocol, according to the organization’s previous leader.

A drone video that has gone viral on Twitter captured the moments after a group of migrants had waded across the Rio Grande from Mexico and walked up the riverbank of Eagle Pass, Texas. The group of migrants stood on the south side of a 6-foot-tall metal fence put up by the state to prevent people from slipping past the Texas National Guard troops on the other side of the fence.

The video, posted by Fox News, shows the guard standing by but not admitting the migrants. Shortly after, Border Patrol agents pull up in a vehicle, and one agent uses a key to unlock the gate, holding it open as migrants proceed through. The group was taken into federal custody for processing.

Footage of the incident has sparked controversy over whether Border Patrol was acting at the direction of the Biden administration to open a fence gate. Rodney Scott, the previous national Border Patrol chief, said agents never should have unlocked the gate.

NEW: For the first time, we witnessed the TX National Guard close & lock a gate on private property at a major crossing area in Eagle Pass, denying entry to migrants who just crossed illegally & expected to be let in. Border Patrol then came w/ a key & let them in for processing. pic.twitter.com/S1fZaTJnEi

“Border Patrol has the legal authority under 8 U.S.C. 1357 to go onto people’s private property within 25 miles of the border for the sole and exclusive purpose of patrolling the border, but they do not have the right to knowingly allow anyone onto someone else’s private property,” said Scott, distinguished senior fellow for border security at the conservative Texas Public Policy Foundation think tank in Austin.

The landowner reportedly allows state military and police, as well as Border Patrol, “to work here,” and the gate has been left open in the past. Texas, however, had moved recently to keep it closed. It is not clear why federal police had the key to a gate that the state erected.

Aaron Reichlin-Melnick, policy director for the American Immigration Council, argued in a Twitter post that Border Patrol has permission “to operate on his land and to process migrants at that location.”

But Gov. Greg Abbott (R-TX) jumped into the debate, charging that President Joe Biden’s policies forced the Border Patrol to open the gate.

Abbott’s press secretary, Renae Eze, told the Washington Examiner on Thursday that the Biden administration is “actively opening our borders.”

“The Biden administration undermined our efforts to protect Texans and repel these illegal immigrants by unlocking the gate and inviting them into our state,” Eze said.

Brandon Judd, president of the National Border Patrol Council, maintained that agents did nothing wrong by unlocking the gate because “once someone enters illegally whether on private property or not, we must take them into custody.”

The influx of up to 2,000 people apprehended in and around Eagle Pass daily in recent months forced Border Patrol to keep half of its agents on transportation, processing, and hospital watch duties as opposed to being present on the border.

Scott said prioritizing what federal law enforcement’s responsibilities are is something that the Biden administration and previous White Houses have done but that given the record-high number of noncitizens crossing the border, agents should be focused on national security and instead have Department of Homeland Security agency U.S. Citizenship and Immigration Services sent in to process administration immigration claims.

“Border Patrol, if they were really prioritizing their resources against the biggest threat, would have increased their patrols to the east and west of that area. And then responded to the aliens that want to surrender and literally are not a flight risk, when they had available resources,” Scott said.