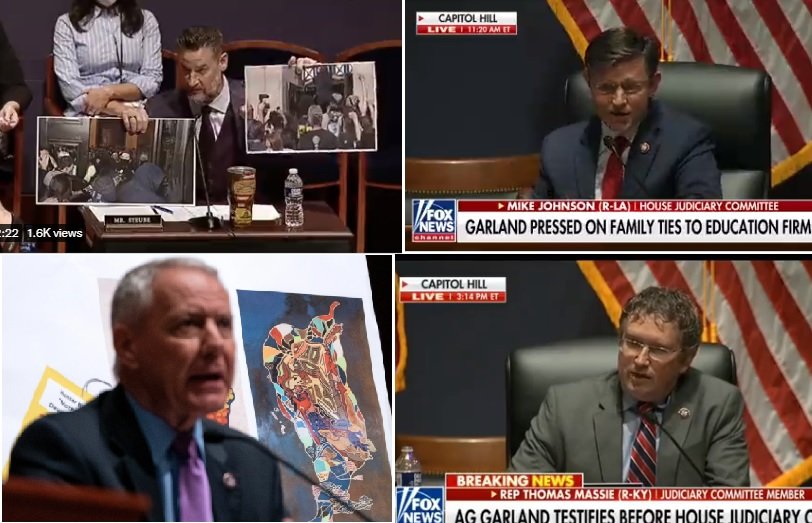 The GOP lawmakers blasted Attorney General Merrick Garland and the criminal actions of the current regime.

Garland, who was unimpressive and a terrible witness, dim and clumsy, had no answers to their many questions on the dire state of the Department of In-Justice and this corrupt regime.

This was absolutely brutal!

Rep. Jim Jordan (R-OH) put Garland in a Half Nelson and grilled the AG on the alleged “uptick” in threats at school board meetings.

JORDAN: “When did you first review the data showing this ‘so-called’ disturbing uptick” in violence directed against school boards?

GARLAND: “So I read the letter and we have been seeing over time…”

JORDAN: “So you read the letter. That’s your source?” pic.twitter.com/LYUyuozXtG

Garland had no answer!

Andy Biggs: “Have you issued a memorandum directing prosecution of the 1.3 million illegal border crossings?”

Andy Biggs: “You’ve managed to issue a memorandum about parents showing up at school boards. Why can’t you issue one” regarding illegal border crossings?” pic.twitter.com/B4qeQqxeWB

Rep. Victoria Spartz (R-IN) who grew up in the Soviet Union warned lawmakers on the FBI’s current resemblance to the Soviet KGB.

As someone who grew up in the USSR, I’m disturbed that FBI is starting to resemble KGB – intimidation, surveillance, suppression of dissent… AG Garland @TheJusticeDept also didn’t firmly reassure us that they will keep Americans safe in light of the border & Afghanistan crises. pic.twitter.com/92YjAjXhb0

@RepGregSteube: “Would you call both of these acts domestic terrorism?”

GARLAND: “I’m not going to comment about particular matters.”