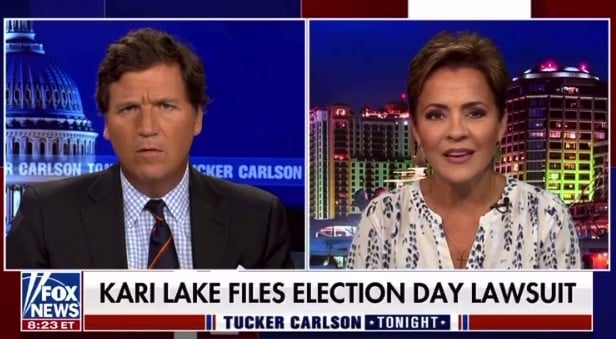 During the discussion, Tucker, who was genuinely impressed with Kari Lake as he was with Republican senatorial candidate Blake Masters, told his audience, “If the election is fair, Kari Lake is going to win.”

And to his credit, Tucker Carlson invited Kari Lake back on his show on Wednesday night after she filed her lawsuit last Friday.

As far as we know, Tucker is the only top FOX News host who has had Kari on since her election was stolen from her and the people of Arizona.

During their discussion, Kari Lake dropped this magnificent line:

Kari Lake: It’s shocking what they did… There are a plethora of problems that went down in Maricopa County and if somebody doesn’t stand up and say, “We can’t have our elections being run this way!” Then we’ll never have another fair election. I mean 60 percent of polling places on Election Day were inoperational and non-functioning. When do we stop and say enough is enough? Do we have to get to 80 percent? 90 percent? 100 percent? When do we say we need to have our elections run fair?

Bravo to Tucker Carlson for running the most important story in America today!

Thank you, @TuckerCarlson for allowing me