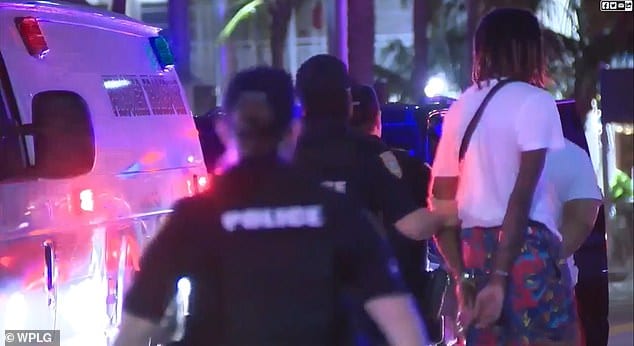 SWAT Teams and several local law enforcement officers are moving in to get a massive crowd of Spring Breakers under control after they refused to abide by an 8 pm curfew set by the city of Miami as part of a state of emergency declared by Miami’s Mayor Dan Gelber.

Large crowds, fights, a deadly shooting and the coronavirus are why officials are imposing an 8 p.m. curfew on South Beach in the middle of spring break. https://t.co/NjMmCQlqcz

100 Percent Fed Up reports – The iconic Clevelander, a popular restaurant and bar in South Beach Miami has announced that they will be closed until at least March 24, due to the “increased violence” by Spring Breakers:

#BREAKING: The increased violence from Spring Break crowds in Miami Beach has led to Clevelander shutting down its food and beverage operations until at least March 24. pic.twitter.com/hMxAaoN7NY

According to Local 10 – “The situation has gotten bad enough that we don’t feel comfortable asking our employees to come into work,” explains the attorney representing the Clevelander, Alexander Tachmes. He says they will meet next week to reassess the closure.

Miami Beach Police say they’re doing everything they can to keep people safe as spring breakers have caused violence and chaos along the streets of South Beach.

News of the increased police patrol comes less than a day after a street melee on Ocean Drive between Eighth and Ninth streets prompted police officers to fire pepper balls to disperse a crowd in South Beach. Officers then detained at least three people, and Miami Beach Fire Rescue personnel responded to help the few who were injured.

Videos of fights in Miami by Spring Breakers are being shared all over social media:

Several Spring Breakers have been arrested.

Daily Mail reports – A SWAT vehicle was filmed moving down Ocean Drive – a popular party street – and using an LRAD, also known as a sound cannon, to get people to disperse, a video posted to Twitter shows.

The move to control the crowds followed weeks of wild partying in Miami Beach, which is no stranger to uncontrollable spring break throngs of young people.

It is now past the 8pm curfew on #MiamiBeach and these are the crowds. @WPLGLocal10pic.twitter.com/UBaZ7gGBD2

But this year the volume is clearly higher than in previous years, said Miami Beach Mayor Dan Gelber, who’s expressed concern about the lack of coronavirus restrictions – like wearing a mask –