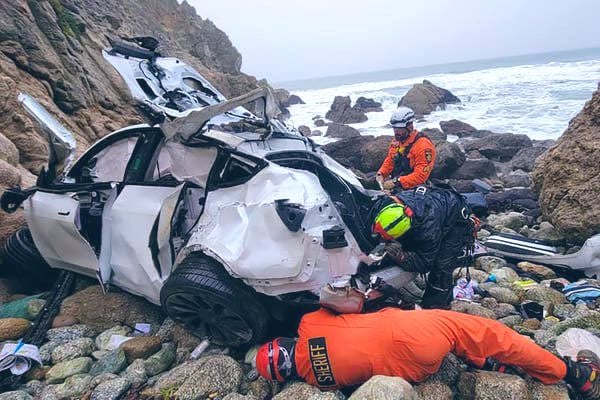 A man will face attempted murder charges for intentionally driving his Tesla over a California cliff with his wife and children inside.

Video from CHP Golden Gate helicopter showing rescue operation of couple who along w/their 2 kids plunged over cliff at Devil’s Slide in a Tesla.

Firefighters rappelled down to rescue the two children.

The victims miraculously survived and were in critical condition.

A doctor whom police say intentionally drove his Tesla off a California cliff – injuring his two children, his wife and himself – will face attempted murder and child abuse charges when released from a hospital where he was in stable condition on Wednesday.

Dharmesh Patel, 41, a radiologist from Pasadena, was placed under arrest after being rescued from the destroyed vehicle at the rocky bottom of Devil’s Slide, a notoriously dangerous cliff above the Pacific Ocean south of San Francisco.

Patel, his 41-year-old wife, his 7-year-old daughter and his his 4-year-old-son all survived the nearly 300-foot (91-meter) plunge to the water’s edge.

Patel was transported to hospital with serious injuries on Monday, the California Highway Patrol said. Authorities plan to book him into the San Mateo County Jail in Redwood City upon his release.