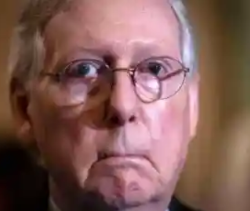 Good news, someone is finally going to challenge Mitch McConnell. Bad news is that McConnell has the votes to win.

Politico is reporting that Sen. Rick Scott (R-Fla.) announced a challenge to Mitch McConnell in a closed-door party lunch on Tuesday afternoon. This is the first challenge to the octogenarian appeaser in fifteen years.

This is partly the result of the midterm performance. How can people not blame McConnell. Trump is an easy scapegoat, but he’s the leader. He deprived some good Trump candidates of funds and is spent $9 million to defeat a Republican running against a Republican.

McConnell says he already has the votes locked up to win a Wednesday leadership election. Scott doesn’t expect to win but he’s moving ahead anyway.

“I’m writing to you today because I believe it’s time for the Senate Republican Conference to be far more bold and resolute than we have been in the past,” Scott said in a message to colleagues announcing his bid. “I understand that I won’t gain the support of every member of our Conference, but we all have a clear choice to make. If you simply want to stick with the status quo, don’t vote for me.”

Maybe there is someone who could beat McConnell, but given the diverse membership, I don’t think so.

Donald Trump Calls for Getting Rid of the Broken Old CrowDecember 13, 2021In “Home of News, Politics & Opinion”