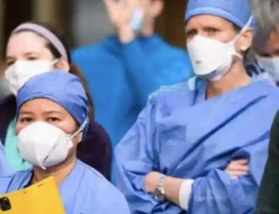 In a groundbreaking decision filed today, NY State (NYS) Supreme Court Judge Gerard Neri held that the COVID-19 vaccine mandate for healthcare workers is now “null, void, and of no effect.” The lawsuit was filed and funded by The Children’s Health Defense (CHD), the Robert Kennedy organization.

The court held that the NYS Dept. of Health lacked the authority to impose such a mandate as this power is reserved to the state legislature. Furthermore, the court found that the mandate was “arbitrary and capricious” as COVID-19 vaccines do not stop transmission, vitiating any rational basis for a mandate.

Gov. Hochul will likely appeal. She tried to rewrite the rules in New York to give herself authoritative powers despite having a Democrat legislature that already does most of what she wants.

It’s a great way to start the new year thanks to CHD.

Last year, Hochul pushed for A416 to amend the New York State Department of Health law to codify masks and quarantine into law. That’s tabled for now. Almost no one liked the idea.

She let her emergency totalitarian powerrs expire right before the election. The timing was interesting.

Justices Barrett & Kavanaugh and the “Irreparable Injury”December 15, 2021In “Home of News, Politics & Opinion”