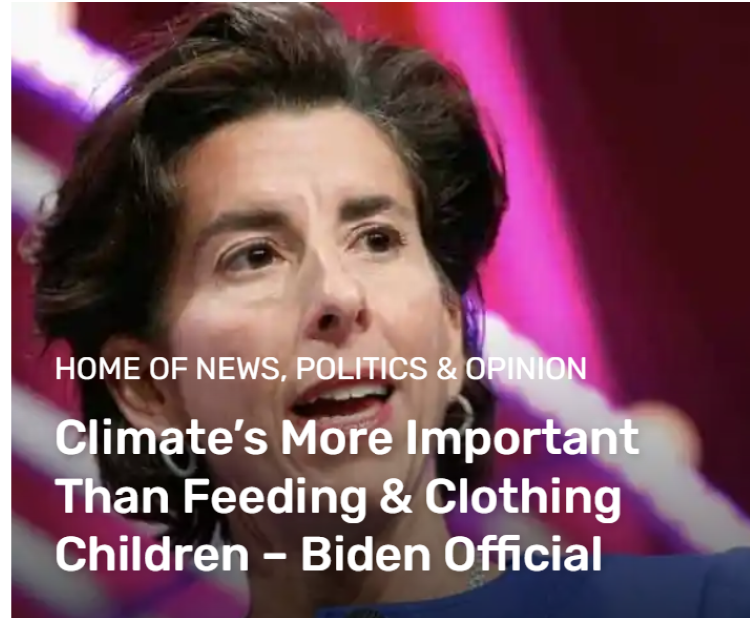 OBIDEN THE BOLD FACED LIAR AND HIS FOLLOWERS

As we reported, Gina Raimondo, the Biden Secretary of Commerce, said the climate is an “existential threat” and it’s more important than feeding and clothing children.

Rep. Cline questioned Secretary Raimondo about a massive reallocation of funds to NOA while inflation skyrockets.

“Look, we believe climate change is an existential threat,” climate cultist Raimondo responded, “so, you know, children won’t–forget about clothes on their back, they’re not gonna be able to have a life if we don’t deal with climate change.”

“My constituents can’t forget about the need to put clothes on their kids’ backs right now,” Rep. Cline said, and climate change, as you say, being an existential threat, is not going to solve the problem of making sure that kids are clothed and fed and off to school.”

Too many people rely on the government. Government is in every area of our lives and they do everything badly. Now, we are allowing them to control our food and clothing.

The government only seeks to grow larger and control everything and everyone. This is why government must remain limited.

The Biden officials blame us for the climate, as well as for the lack of baby formula, and for basically everything. In truth, whatever problem exists, the government causes or exacerbates it. Right now, they are causing a crisis in food, clothing, fuel, and other goods with their inflationary policies.

The Secretary of Commerce, Gina Raimondo, blames you for climate change. You want to feed your babies and dress your children, you greedy peasant.

Biden Points to Who’s to Blame for the Baby Formula Crisis – YOU!May 14, 2022In “Home of News, Politics & Opinion”

Forget Russians, The Elites Are ComingApril 5, 2022In “Home of News, Politics & Opinion”

Russia Attacks Kyiv in a War Against the West – WATCH LIVEFebruary 24, 2022In “Home of News, Politics & Opinion”