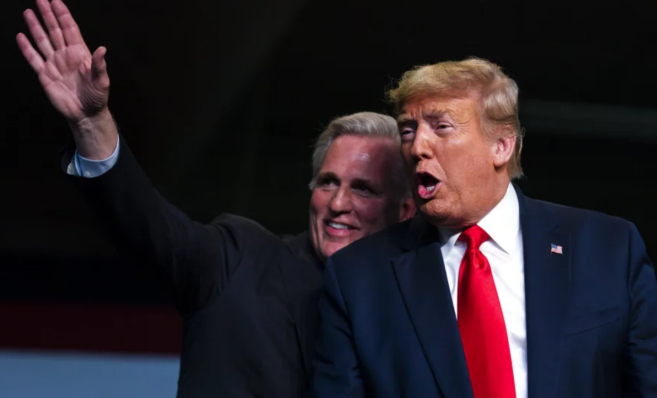 Rep. Jamie Raskin (D-MD), a member of the Jan. 6 committee who led the second impeachment effort against Trump, pointed to frustrations harbored by members of the conservative Freedom Caucus, which reportedly has not yet settled on an alternative candidate, while some Democrats have signaled openness to striking a deal with McCarthy.

“It’s a real problem for Kevin McCarthy now, because there are certain pro-Trumpists within his House caucus who refuse to accept that he’s really with Trump, and they want to get rid of McCarthy,” Raskin said on CBS News’s Face the Nation.

He told the show’s moderator, Margaret Brennan, that some members’ names are early in the alphabet, including Rep. Andy Biggs (R-AZ), who could steer the course of the vote for other members of the group. They reportedly want concessions from McCarthy if they are to back him.

Rep. Raskin is concerned Trump could become Speaker of the House.

“One potential candidate who’s name has been floated is Donald Trump himself because the Speaker of the House does not have to be a member of the House.” pic.twitter.com/5K0xuOfZoG

“They might just vote for Trump, when they take the roll call for speaker, so we know that the hard-right Freedom Caucus people are in search of another candidate, and one potential candidate whose name has been floated is Donald Trump himself, because the speaker of the House does not have to be a member of the House. And they are talking about putting Trump right there,” Raskin said.

Brennan posited that Trump for speaker is “not a real option,” but Raskin did not seem convinced that some of his GOP colleagues wouldn’t try it.

“They talk about it repeatedly,” Raskin replied. “And if Trump decided he wanted to do it, it would pose a profound problem for their party because they refuse to do the right thing,” he added, before getting into the question of whether the Republican Party remains under firm control by Trump after weaker-than-expected midterm elections for Republicans.

Republicans are still expected to win control of the House, but the margin appears tighter than what was predicted before the midterm elections, and there is still room for Democrats pulling an upset to maintain the lower chamber. Steve Kornacki, national political correspondent for MSNBC and NBC News, has revised his House projection to show Republicans winning 219 seats, just one more than the 218 needed to get a lock on the chamber. He “stressed” that this new reading is within the margin of error, which was four seats.

Despite talk of Trump for speaker, which has been floated by House Republicans including Matt Gaetz, the former president himself has dismissed the idea. And further, he is slated to deliver a big announcement on Tuesday, which is widely expected to be his entry into the 2024 presidential race.