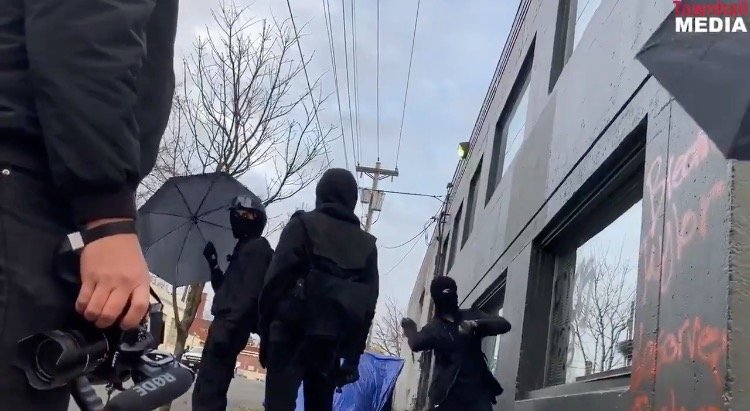 The Democrat Party Of Oregon has released a statement in response to the inauguration day festivities where the *mostly peaceful* terrorists of antifa targeted their building, smashing out several windows and tagging the place with graffiti. Except they refuse to name Antifa as the culprits, and instead vaguely try to blame Republicans for the vandalism.

From the DPO’s official press release:

We want to share an update from our Chair, KC Hanson, about the incident at our office in Portland on Wednesday:As you may have heard, our office in Portland was severely vandalized only hours after President Joe Biden was sworn in.What began as a day of joy and celebration with the Inauguration of Joe Biden and Kamala Harris unfortunately ended with frustration and disappointment as Democratic Party of Oregon staff rapidly responded to the incident and assessed the damage.All told, nine windows and our front door were busted out. The damage is extensive and discouraging, but I’m incredibly thankful that none of our staff were in the building at the time, and grateful for their quick response.This is not the first time our building has been vandalized during the past year, and none of the prior incidents have deterred us from our important work to elect Democrats up and down the ballot. This incident will be no different.Even with insurance, responding to these incidents takes significant resources and costs valuable staff time. A number of folks in our incredibly supportive Democratic community have already reached out, and asked how they can help, and that means a great deal to all of us. If you’d like to chip in to help us defray some of the costs of repairing the damage from this incident, you can do so at dpo.org/building-repairsNone of this should take away from the fact that Democrats in Oregon and across America have so much to celebrate right now! Not even one full week into the new administration, President Biden and Vice President Harris are already starting the work to build back better, with dozens of critical Executive Orders on climate, pandemic response, immigration, racial equity, and more.There is still so much to be done, but we at the Democratic Party of Oregon are resolute and determined to do everything in our power to support the Biden/Harris administration, and to help Oregon and America recover from the pandemic stronger than before.Your support enables us to continue our mission of electing Democrats. We are at work year-round promoting Democrats, providing resources and sharing the Democratic vision.Years of relentless Republican attacks on our Democratic values and the very foundations of our democracy have not stopped our work, and neither will this senseless vandalism. We are undeterred.We’re thankful to have Oregon Democrats like you on our team as we