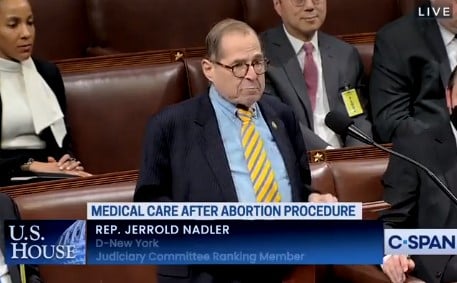 Rep. Jerry Nadler argued on the House floor that taking babies to the hospital who survive the abortion procedure “endangers” the baby.

Democrats prefer the abortion doctor let the baby bleed out on the table.

Because that would be an admission they’re babies, not clumps of cells.https://t.co/R5feTV7wrDpic.twitter.com/PyJeJBoi4l

This is nothing new for Democrats.

Barack Obama voted four times while he served in the Illinois Senate in support of infanticide.

This was before he joined the US Senate in 2005.

Obama opposed life-sustaining treatments for babies born alive after failed abortions. It’s one of his unbelievable and extremist positions that the liberal media overlooked while he was in office.

This week Women Speak Out PAC released a new ad exposing his radical support for infanticide.

From an October 2012 TGP Post:   On October 10th, the Women Speak Out PAC, the super PAC of the national pro-life Susan B. Anthony List (SBA List), will announce a $150,000 ad buy in Virginia and unveil a new television ad at a press conference in the state capitol in Richmond. The ad, which exposes President Obama’s opposition to legislation providing equal treatment to babies born alive after a failed abortion, will be played at the press conference. SBA List President Marjorie Dannenfelser will be joined by State Delegate Brenda Pogge as well as abortion survivor Melissa Ohden and nurse and whistleblower Jill Stanek, both featured in the new TV spot.