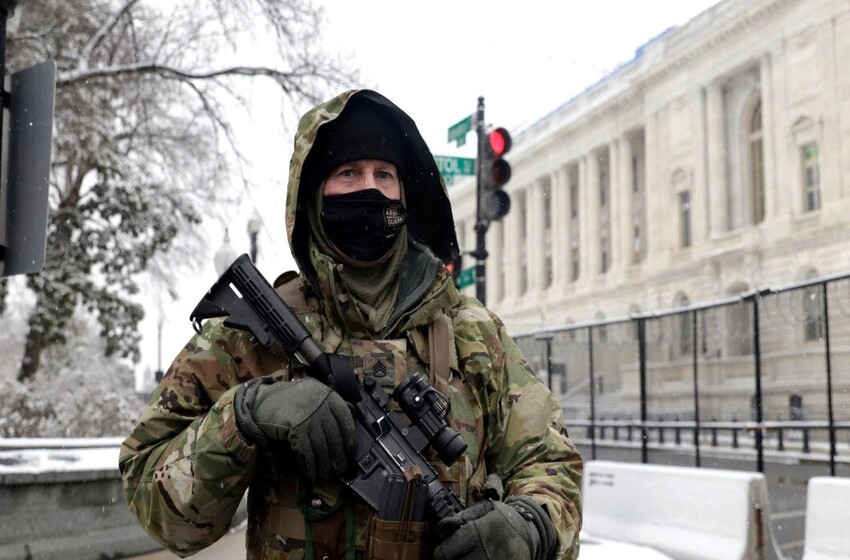 Snowy conditions are not keeping thousands of National Guard troops from protecting the Capitol, and neither is a threat picture about a possible repeat of Right-wing extremist violence that remains unclear.

“We currently have just over 7,000 soldiers and airmen assigned to the National Guard mission in Washington, D.C., and we remain on track to draw down to 5,000 through mid-March,” D.C. National Guard spokesman Capt. Tinashe Machona confirmed to the Washington Examiner on Monday.

The FBI again declined to comment on the threat assessment in Washington that is used by law enforcement as the rationale for maintaining a Guard presence in the capital nearly equal in strength to previous presidential inaugurations.

Members of Congress have called on the Guard to be sent home in recent days, while some governors have ordered their troops to depart Washington. Both sets of concerns are based on worries there is no imminent threat for the kind of violence seen at the Capitol complex on Jan. 6 and on how the troops have been treated after thousands were ordered to rest in a parking garage with limited restrooms.

Some Guard members have grumbled to reporters that they do not know why they remain in Washington, away from their day jobs and families, even as some units are heading home.

Those departures have not affected the Guard’s ability to meet the requests for support from the Secret Service, Park Police, U.S. Capitol Police, and D.C. Metropolitan Police.

All Guard members have cold-weather gear and heated, designated rest areas where they can get out of the frigid winter weather while others are on watch, said Machona.

The Guard again declined to provide the exact number of members stricken by COVID-19, though it had previously reported that at least 200 had tested positive and remain in quarantine.

Machona said none have been hospitalized, and all were checked upon arrival from their home states.

“They had their temperatures checked and completed a screening questionnaire. Masks and social distancing are required where the missions allows,” he said.

Meantime, razor wire has been added to nonscalable fencing, and trucks have blocked previously open streets along the south perimeter of the Capitol barrier.

Defense Secretary Lloyd Austin made his way to the Capitol building Friday afternoon to greet troops, repeatedly asking them if they have what they need to conduct their mission.

“The entire Army is behind us,” one commander told the secretary after confirming they were well taken care of.

Guard members who spoke to the Washington Examiner just days earlier were weary of their uncertain mission length, which could keep Guard members on duty until March 14.

Guard members also declined to describe their rest areas in the Capitol, a source of controversy recently after service members were abruptly relocated to a parking garage for several hours before being allowed to return.

Again, the D.C. National Guard refused to describe those facilities other than to underscore that Guard members stay at hotels when not patrolling the Capitol.

“To be clear, this is not where they are lodging when off-duty,” Machona said. “Our personnel work in shifts and rest when they can as others stand watch.”