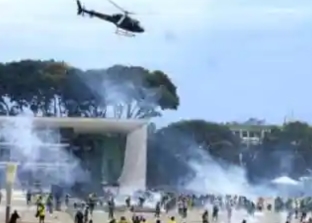 WHAT A PIECE OF SHXT

Supporters of former Brazilian President Jair Bolsonaro, who believe the election was fraudulent, stormed Congress, the Supreme Court, and the presidential palace in the capital on Sunday. A week ago, President Luiz Inácio Lula da Silva was inaugurated. Eric Swalwell is blaming Kevin McCarthy and Republicans for the riot.

Thousands of demonstrators bypassed security barricades, climbed on roofs, broke windows, and invaded all three buildings, which the vast Three Powers Square connects in Brasilia. Some called for a military intervention to either restore the far-right Bolsonaro to power or oust Lula from the presidency.

TV channel Globo News showed protesters roaming the presidential palace, many wearing the green and yellow colors of the national flag that also has come to symbolize the nation’s conservative movement, coopted by Bolsonaro.

Eric Swalwell is blaming Kevin McCarthy and the Republicans for the Brazil riot.

This violent attack on Brazil’s government is the first export of Kevin McCarthy’s Insurrection Party. https://t.co/apKtdfaG8r

LULA DECLARES A STATE OF EMERGENCY

They have their own Shaman.

Brazilian President Luiz Inacio Lula da Silva has declared a state of emergency in the Federal District of Brasilia.

The leftist leader, inaugurated just last week, gave the order on Sunday, appointing justice minister Ricardo Garcia Capelli to lead the ‘federal intervention.’ Lula’s order gives Capelli the power to ask civil and military bodies for “the necessary means to achieve the object of the intervention.”

The scope of the order, which expires at the end of the month, is limited to Brasilia’s Federal District, and its stated aim is to “end the serious compromising of public order in the State in the Federal District, marked by acts of violence and invasion of public buildings.”

A police car is driving into protesters in Brazil pic.twitter.com/CIvZf72b5t

🚨#BREAKING: Mass arrests of pro-Bolsonaro protesters at the presidential palace

Jair Bolsonaro Challenges the Election – Some Machines Not AuditableNovember 22, 2022In “Home of News, Politics & Opinion”

Bolsonaro Supporters Call on the Military to Invoke Art. 142 – Coup in the AirNovember 29, 2022In “Home of News, Politics & Opinion”