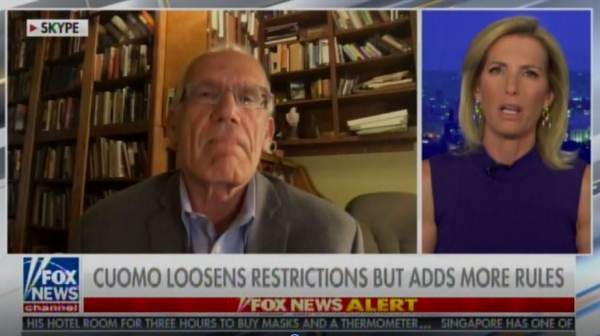 On Friday night Victor Davis Hanson joined Laura Ingraham on The Ingraham Angle to discuss the tyrannical Democrat governors who are refusing to follow science and instead are putting unrealistic expectations on the situation in their state before they left their lockdowns.

Victor Davis Hanson: I thought they were the party of science. And the science is if you have access to Western medicine and we do. And most people are not 65 or over like I am. And they don’t have comorbidity. They have about one or two chances in a thousand what they risk every day with elective surgery less chance of dying… They’re destroying the First and Second and even the Fourth and Fifth Amendments on edicts that have no majorities. Nobody voted for them. They’ve become power hungry.

The risk of death during elective surgery is 0.67%

The risk of death from coronavirus is 0.1% to 0.3% which is slightly higher than the seasonal flu.

Dr. Tony Fauci destroyed the US economy based on ridiculous models and phony predictions.