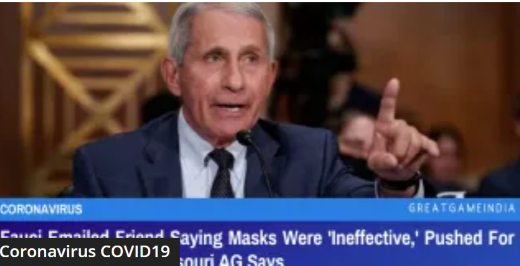 Schmitt wants to show that Fauci collaborated with Facebook and others to dispel rumors that the virus was created in a lab in Wuhan, China. Fauci emailed friend saying masks were ‘ineffective,’ pushed for mandates anyway, said the Missouri AG.

The Republican attorney general of Show-Me State tweeted a “tidbit” from his interview with the departing director of the National Institute of Allergy and Infectious Diseases on Friday:

“Another tidbit from Fauci depo: In Feb ‘20 he emailed a friend advising her masks were ineffective. Confirmed again on Mar 31. On Apr 3 he’s adamant masks should be worn even though he couldn’t cite a single study to prove it. Mandates followed—Lives ruined.”

As part of their lawsuit, Schmitt and Louisiana Attorney General Jeff Landry cross-examined Biden’s main medical advisor on Wednesday for his alleged involvement in a conspiracy with Big Tech to censor information regarding COVID-19.

Schmitt and Landry filed the suit in May, alleging that senior government figures collaborated with Twitter, YouTube, and Meta [Facebook] “under the guise of combating misinformation” to enact further restrictions.

They want to show that Fauci collaborated with Facebook and others to dispel rumors that the virus was created in a lab in Wuhan, China.

“Defendant Dr. Anthony Fauci, a senior federal government official, coordinating with others, orchestrated a campaign to discredit the lab-leak hypothesis in early 2020,” Landry and Schmitt said in their brief. “As director of [National Institute of Allergy and Infectious Diseases], Dr. Fauci had funded risky ‘gain-of-function’ research at the Wuhan Institute of Virology through intermediaries such as EcoHealth Alliance, headed by Dr. Peter Daszak.”

“Thus, if the lab-leak theory were established, Dr. Fauci and Dr. Daszak could be potentially implicated in funding the research on viruses that caused the COVID19 pandemic and killed millions of people worldwide,” they said.

Schmitt claimed Fauci “knew the Lab Leak theory had merit but it’d come back to him & sought to immediately discredit it.” in a tweet on Wednesday after the deposition.

Fauci stated, “Every day for all those years I’ve given it all that I have, and I’ve never left anything on the field,” in his final White House press appearance before his 50-year career ends next month.