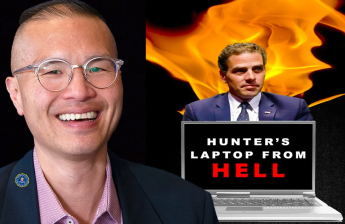 THE BIDNEN D.O.J. IS GETTING CAUGHT. THE MAIN STREAM MEDIA IS INVOLVED.

The FBI’s collusion with Facebook & Twitter to censor the bombshell New York Post story about the Bidens’ corruption provided far greater election interference than anything Russia ever did.

Attorneys General for Missouri and Louisiana released the full 386-page transcript from their November 29th, 2022, deposition of FBI Supervisory Special Agent Elvis Chan, which was taken as part of a landmark lawsuit against the Biden Administration for colluding with social media companies to censor Americans.

Join the 49,000 subscribers who read my newsletter!

“The warnings were so specific that Twitter immediately censored The Post’s scoop about Hunter Biden’s laptop on Oct. 14, 2020, citing its “hacked materials” policy,” Miranda Devine wrote in the New York Post’s coverage of the story.

“The extraordinary revelation for the first time lays bare how the FBI was involved in pre-bunking the story of the laptop, which had been in the bureau’s possession for almost a year.”

While Chan denies ever specifically naming Hunter Biden in the transcript of his deposition released today, “Chan’s testimony contradicts a previous sworn statement by Yoel Roth, Twitter’s former head of site integrity, stating that the FBI had named Hunter when warning the company about expected “hack-and-leak operations’’ before the election,” said Devine.

Chan, who is the head of the FBI’s San Francisco cyber division received his master’s degree in homeland security studies from the Naval Postgraduate School, where he wrote a 2021 postgraduate thesis entitled “Fighting Bears and Trolls: An Analysis of Social Media Companies and U.S. Government Efforts to Combat Russian Influence Campaigns During the 2020 U.S. Elections.”

The 149-page document reads like a Rachel Maddow Russiagate monologue and offers a glimpse into the political bias that led Chan to place his thumb on the scale of the 2020 election.

“Mueller and his team had two main findings regarding the Russian influence campaign. First, the report found that the IRA’s social media campaign aimed to sow discord in the U.S. elections but pivoted to favoring Donald Trump when it became apparent he would be the Republican presidential nominee. Second, Mueller’s team concluded that the hack and dump attack against the DNC was intended to harm Hillary Clinton’s presidential campaign.”

Chan’s statement ignores the realization that Crowdstrike CEO Shawn Henry claimed under oath to Congress that his cyber-firm, which did the forensic analysis of the DNC server, had no “concrete evidence that the data was exfiltrated [moved electronically] from the DNC.”

“There are times when we can see data exfiltrated, and we can say conclusively,” Henry said in a declassified 2017 interview. “But in this case, it appears it was set up to be exfiltrated, but we just don’t have the evidence that says it actually left.”

“The allegation that Russia stole Democratic Party emails from Hillary Clinton, John Podesta, and others and then passed them to WikiLeaks helped trigger the FBI’s probe into now-debunked claims of a conspiracy between the Trump campaign and Russia to steal the 2016 election.”

In Chan’s postgraduate thesis, he goes into great detail about how Russia influenced the 2016 election, but he does not mention that Crowdstrike’s CEO admitted there is “no concrete evidence” that Russia exfilitrated the data from the DNC server.

“Despite a broad agreement within the United States that the Russians attempted to interfere in the 2016 U.S. elections, some conservative American media have disputed the impact these efforts had on the election outcome. In a New York Magazine article, Margaret Hartmann, senior editor, stated, “the general consensus is that liberals are overstating the significance of Russia’s alleged meddling in an effort to shift the blame for their loss from Hillary Clinton, and undermine Trump’s presidency.”

Chan vastly overstates the impact of Russian interference in the 2016 election throughout his postgraduate thesis.

In an election that saw Trump’s campaign spend more than $950 million and purchase up to 100,000 Facebook ads per day, the Russian firm Internet Research Agency (IRA) purchased around 3,500 advertisements. Their expenditures totaled approximately $100,000 over two years.

Furthermore, the Mueller report says, “the report itself does not state anywhere that the Russian government was behind the Internet Research Agency activity.”

The Department of Justice dropped the charges against the Russian troll farms accused of infleuncing the election when they showed up to court to contest the charges.

“Putin may have sensed that Donald Trump’s rise as a legitimate candidate offered an avenue to advance his anti-American agenda. Putin’s strategy evolved as the presidential campaign season continued through the summer, supporting Trump as its centerpiece. The Russian covert influence operation pivoted to helping the Trump campaign, in addition to its continued efforts to tear down the Clinton campaign.”

This hyper-partisan worldview leaked into Chan’s duties as the FBI Special Agent in charge of advising social media companies on what election information to censor and what not to censor.

The Bureau had the Biden laptop’s in it’s possession for nearly a year, and should have known that the contents of the laptop were not Russian disinformation.

They should have quickly and easily verified that the laptop were the legitimate contents of the Democrat front-runner’s son, Hunter Biden, but whistleblower reports provided to Senator Chuck Grassley reveal that FBI Special Agent Timothy Thibault inaccurately labeled the Biden laptop as disinformation, which protected Joe Biden from further scrutiny.

Furthermore, “the FBI was spying on Trump’s then-lawyer Rudy Giuliani’s online cloud,” under the pretext of an investigation into alleged foreign agent registration violations, which “gave the FBI access to emails in August 2020 from Delaware computer repair store owner John Paul Mac Isaac,” according to Miranda Devine.

Chan’s actions which led to Facebook and Twitter censoring the bombshell New York Post story about the Biden family corruption provided far greater election interference than anything Russian troll farms did in 2016 or 2020.

“The other prominent topics focused on promoting Trump, a right-wing meme that accused the FBI of misusing the Steele dossier to obtain a surveillance order on Trump associate, Carter Page, and Islamophobic rhetoric. The themes promoted by the IRA on Twitter showed its continued acuity in determining the hot-button issues that would agitate right-wing voters.”

In 2021, FBI Special Agent Chan accused the IRA of promoting “a right-wing meme that accused the FBI of misusing the Steele dossier to obtain a surveillance order on Trump associate, Carter Page….”

The now-debunked claims promoted by Steele were presented without evidence or named sources in a dossier hired by a political campaign and produced by a former spy who spent his life being paid to lie.

The Department of Justice Inspector General decimated the credibility of Steele, the dossier, and the FBI, yet Special Agent Elvis Chan still refers to this as a “right-wing meme” in his 2021 postgraduate thesis.

In 2017, the FBI already knew Steele had no credible sources and that his dossier was essentially filled with Russian disinformation, but the truth about this information was withheld from the American public.

Instead, these lies built on a dossier generated by the Clinton campaign were used to launch years of investigations and media headlines which falsely claimed former President Trump was an agent of the Kremlin.

In 2019, Inspector General Michael Horowitz’s report concluded that the FBI would not have been able to spy on former Trump aide Carter Page without using the discredited Steele dossier.

The Office of the Inspector General “determined that Crossfire Hurricane team was unable to corroborate any of the substantive allegations regarding Carter Page listed in Steele’s election reporting, which the FBI relied on in the FISA application.”

Chan does not mention Inspector General Michael Horowitz in his 2021 postgraduate thesis on Russian influence in American elections.

Last month, Marco Polo, a nonprofit led by a former President Donald Trump staffer, released a 630-page report with 2,020 citations that fully document 459 crimes committed by the Biden family and their business associates.

The FBI placed their finger on the scales of the 2020 election after having the Biden laptop for a year, ignoring the evidence of substantial crimes, and then telling social media companies to expect a Russian “hack-and-leak operations’’ involving Hunter Biden.

The FBI, who was aware that the story was going to come out because they were spying on former President Trump’s attorney Rudy Guilani, colluded with the biggest social media companies in the world to censor true stories about Joe Biden’s corruption.

FBI Supervisory Special Agent Elvis Chan, who donated to Democrat candidates during the 2020 election, clearly demonstrates his political bias in his postgraduate thesis and should be removed from his role with the Bureau.

This political bias led to big tech doing the bidding of big government working hand in glove with the FBI which ultimately caused far greater election interference than anything Russia ever did.

To turn this passion into a career, I need your support: subscribers who sign up for $5 a month enable me to work full-time as an independent journalist and empower us to reach an ever-expanding audience. For the price of a cup of coffee, you become my largest benefactor, and my work continues to be accountable only to truth, freedom, and the American people.