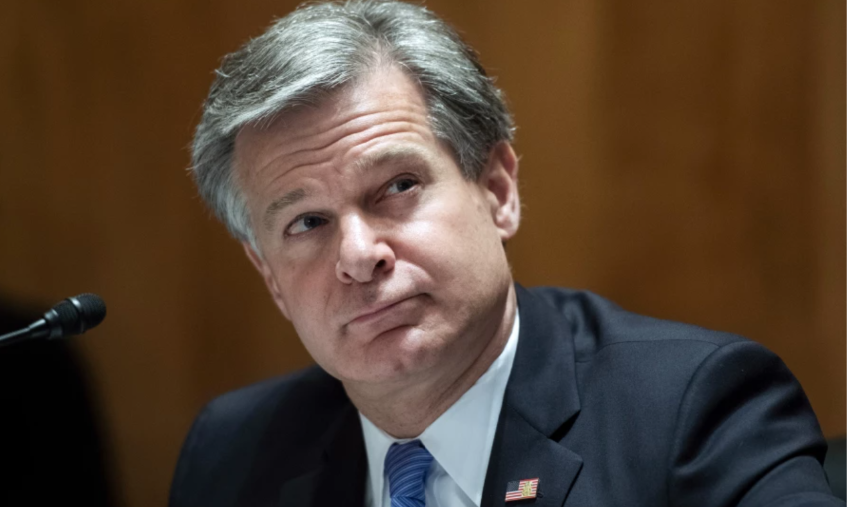 FBI Director Christopher Wray will face a Thursday grilling from Senate Republicans about whistleblower claims that the bureau improperly labeled evidence about Hunter Biden as disinformation in 2020.

Wray, who has led the FBI since 2017, is appearing before the Senate Judiciary Committee, where he will face criticism about the handling of the investigation into President Joe Biden’s son, likely along with a host of questions about how the FBI is handling the Capitol riot investigation, rising crime, national security threats, and more.

“I expect him to answer on how he’s going to stop political bias at the FBI,” Sen. Chuck Grassley (R-IA), the ranking member of the Senate Judiciary Committee, tweeted this week, adding in a video that “I would expect Wray to come up with some concrete program where he’s going to be able to tell the 22 members of this committee what he’s going to do to take political bias out of the investigations that the FBI is doing.”

The senator sent a letter to Wray last week asking for more details about an Aug. 2020 briefing on alleged Russian influence efforts that he says were pushed on him and then leaked to the press to hurt his investigation into the president and Hunter Biden. Whistleblowers revealed to him recently that FBI officials were undercutting or burying facts about the younger Biden around the same time.

FBI supervisory intelligence analyst Brian Auten opened an assessment in Aug. 2020 that “was used by a FBI Headquarters team to improperly discredit negative Hunter Biden information as disinformation and caused investigative activity to cease,” according to whistleblower disclosures.

“The concurrent opening of Auten’s assessment, the efforts by the FBI HQ team, and the efforts by the FBI to provide an unnecessary briefing to me and Sen. Johnson that provided our Democratic colleagues fodder to falsely accuse us of advancing foreign disinformation draws serious concern,” Grassley told Wray last month.

One of the whistleblowers claimed the FBI assistant special agent in charge of the Washington field office, Timothy Thibault, had “ordered closed” an “avenue of additional derogatory Hunter Biden reporting” in October 2020.

Grassley gave a Monday speech on the Senate floor where he called the whistleblowers “patriots” and said Wray “has personally told me that they won’t be subject to retaliation.” He argued that the FBI director has “an obligation to the country to immediately investigate these allegations and clean house.”

Senators also likely plan to question Wray about the FBI’s botched handling of its investigation of former USA Gymnastics team doctor Larry Nassar and the Justice Department’s decision not to charge FBI agents with lying to watchdog investigators.

Wray will also almost certainly also be asked about the FBI’s role in investigating the events surrounding Jan. 6, 2021.

The Justice Department shed light on the reasons behind the doubling of domestic terrorism cases since early 2020, with a top DOJ official saying prosecutions related to the Capitol riot make up “at least a significant portion of that jump.”

The DOJ said this week that more than 850 defendants had been arrested in relation to the Capitol riot, including over 260 charged with assaulting or impeding law enforcement.

The bureau chief will also likely be asked about the rise of China. Wray gave an early July speech alongside the head of the United Kingdom’s MI5 where he warned of the challenge.

“We consistently see that it’s the Chinese government that poses the biggest long-term threat to our economic and national security — and by ‘our,’ I mean both of our nations, along with our allies in Europe and elsewhere,” Wray said.

Last month, Wray warned about the governments of China, Russia, and Iran potentially trying to meddle in or influence the midterm elections.

The FBI and the Department of Homeland Security are purchasing and using Chinese-made drones from a “Chinese Military Industrial Complex” company called DJI that has close links to the Chinese government, according to testimony from Biden administration officials last month. Wray may be asked if the bureau will continue to use those drones.

Also, since the May leak of a draft of the Supreme Court’s opinion overturning Roe v. Wade, there have been heightened threats against Supreme Court justices and anti-abortion rights advocates, including attacks and vandalism targeting activist groups, pregnancy centers, and churches across the country. Republicans have called on the DOJ to do more, and Wray is sure to be asked about it.