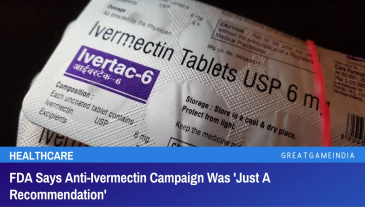 According to an argument made by government lawyers during a recent hearing, the US Food and Drug Administration (FDA), which made fun of Americans for using Ivermectin to treat Covid-19, now claims that its campaign encouraging people to “stop” taking it was informal and merely an recommendation.

“The cited statements were not directives. They were not mandatory. They were recommendations. They said what parties should do. They said, for example, why you should not take ivermectin to treat COVID-19. They did not say you may not do it, you must not do it. They did not say it’s prohibited or it’s unlawful. They also did not say that doctors may not prescribe ivermectin,” Isaac Belfer, one of the lawyers, told the court during the Nov. 1 hearing in federal court in Texas.

“They use informal language, that is true,” Belfer continued, adding “it’s conversational but not mandatory.”

Yet, in 2021 the FDA created a web page titled “Why You Should Not Use Ivermectin to Treat or Prevent COVID-19,” before then tweeting: “You are not a horse. You are not a cow. Seriously, y’all. Stop it.”

A second Twitter campaign read as follows: “Hold your horses, y’all. Ivermectin may be trending, but it still isn’t authorised or approved to treat COVID-19.”

The FDA answered the following question on a different page cited by The Times: “Q: Should I take ivermectin to prevent or treat COVID-19? A: No.”

JARED KELSON, AN ATTORNEY REPRESENTING THE PLAINTIFFS, TOLD THE COURT DURING THE HEARING THAT THAT INFORMAL CLAIM “DOESN’T EXPLAIN THE LANGUAGE THEY ACTUALLY USED: ‘STOP IT. STOP IT WITH THE IVERMECTIN.’”

THE FDA’S ACTIONS “CLEARLY CONVEY THAT THIS IS NOT AN ACCEPTABLE WAY TO TREAT THESE PATIENTS,” HE ARGUED.

PLAINTIFFS IN THE CASE INCLUDE DR. PAUL MARIK, WHO BEGAN UTILIZING IVERMECTIN IN HIS COVID-19 TREATMENT PROTOCOL IN 2020 WHILE HE WAS CHIEF OF PULMONARY AND CRITICAL CARE MEDICINE AT EASTERN VIRGINIA MEDICAL SCHOOL AND DIRECTOR OF THE INTENSIVE CARE UNIT AT SENTARA NORFOLK GENERAL HOSPITAL.

AFTER THE FDA’S STATEMENTS, MARIK WAS TOLD TO REMOVE THE PROTOCOL FROM THE SCHOOL’S SERVERS WHILE SENTARA ISSUED A MEMORANDUM TO HOSPITALS TELLING THEM TO STOP USING IVERMECTIN AGAINST COVID-19, WITH A CITATION TO THE FDA.

The FDA is currently engaging in some “grade A gaslighting,” according to “Gone Viral” author Justin Heart.

This commonly prescribed anti-parasitic, which is also used in horses, has demonstrated enormous success in treating mild and moderate cases of Covid-19 as well as serving as a preventative. Ivermectin was widely used in its early stages and, according to the province of Uttar Pradesh in India, which has over 200 million residents, “helped keep positivity [and] deaths low.”

Separately, the Indian government has supported a number of studies, many of which were carried out at their top public medical university (AIIMS).

Here are some other human research on the “horse dewormer” from multiple countries:

Meanwhile, There are currently 86 ongoing or completed clinical trials on Ivermectin around the world.