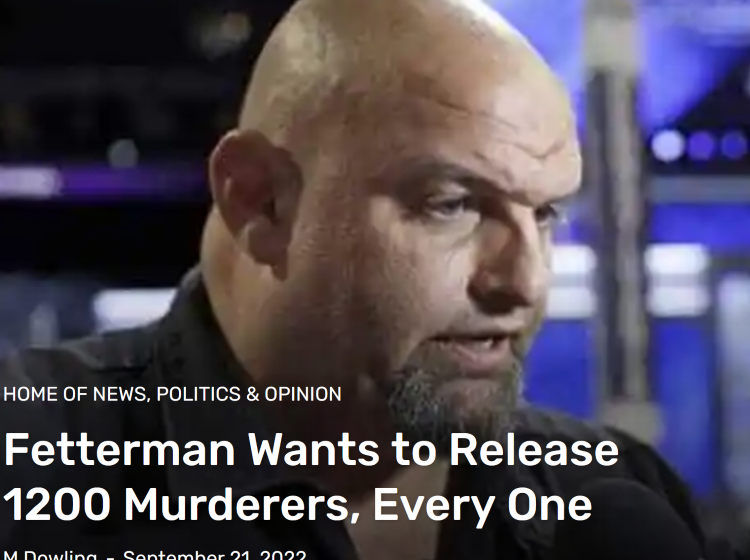 BIDEN’S DEMS OUT TO DESTROY AMERICA

It is hard to believe that John Fetterman is leading in Pennsylvania by +4 over Dr. Mehmet Oz. Oz went into the race with high negatives, but this defeat would be quite remarkable given Fetterman’s failings. Fetterman didn’t earn a paycheck until he was 49, living off his wealthy family. He doesn’t pay his bills, and his agenda is to Bernie Sanders’s left.

The right-leaning Trafalgar pollster said it is impossible to get accurate polling. Some Republicans don’t trust the system and will not participate in polls. Their views remain unknown.

Fetterman, the furthest left candidate to ever run in the United States, wants to free 1200 inmates convicted of murder.

In Pennsylvania, there are close to 1,200 inmates in prison for second-degree murder.

John Fetterman said he wants to “free” every single one of them. All 1,200. pic.twitter.com/62VAzOfjn9

He has also been coming out strongly for sanctuary cities as millions of unvetted anonymous people pour in. They will change the country forever. Sanctuaries are only there to protect lawbreakers.

“Sanctuary cities is another policy that I very much support.” — Democrat John Fetterman pic.twitter.com/iptcONeZKP

John FETTERMAN wants to “invest more” in public schools. Court records show he was delinquent on tens of thousands of dollars in taxes to his local school district, one of the poorest in the state. https://t.co/tkWUgKmwoG

In other news, four years ago, polls had Brian Kemp up three points, and he won by 1.4%. This year, Kemp leads the polling average by 6.6%, and most Republicans and Democrats privately expect him to exceed his polling average at the ballot box. In very big news, he is getting at least a third of black men voting for him, RCP reports.

The New York Times struggled to explain the views of the entire Hispanic community based on a survey of 522 Hispanic voters. They wrote:

Hispanic voters have moved to the right over the past several years. As a group, they still prefer Democrats, but the margin has narrowed significantly. In 2020, Joe Biden won the group by only 26 percentage points. And in this year’s midterms, the Democratic lead is nearly identical to Biden’s 2020 margin…