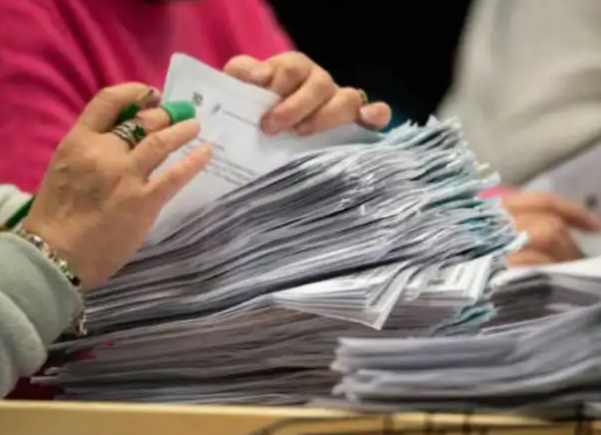 DO YOU REALLY THINK BIDEN GOT 81 MILLION VOTES

Florida’s newly created Office of Election Crimes and Security requested a criminal investigation into charges of ballot harvesting in Orlando. Orlando is a Democratic stronghold in the critical swing state. Law enforcement is considering launching a probe.

Whistleblower Cynthia Harris filed a sworn affidavit in late August with the Secretary of State. She said that voting activists are paid $10 for each ballot they collect in an illegal ballot harvesting operation.

The Washington Times reports that Cynthia Harris, a Democrat who ran unsuccessfully for District 6 commissioner in Orange County, which includes Orlando, provided a sworn complaint to the election crimes office, alleging left-leaning organizations have been perpetrating a scheme to encourage residents in black neighborhoods to apply for mail-in ballots and to fill out those ballots, which she said have been collected by paid canvassers, and sometimes altered, all in violation of state law.

In an interview with The Washington Times, Ms. Harris said she has video evidence of paid ballot harvesters operating in Orlando neighborhoods in both 2014 and 2017, and that the scheme has been going on for decades, continuing through the 2020 election and the 2022 primary.

According to Ms. Harris, the operation is run by unnamed local Democratic operatives funded by progressive groups who mainly seek out the disabled and the elderly, urging them first to apply for absentee ballots, which can be requested by any voter in Florida.

“They know a whole year ahead who they are going to target and who they’re going to prey upon,” Ms. Harris said. “They get them to fill out an absentee ballot request, usually a year ahead of time. Then they’ll knock on their doors, and they’ll say, ‘You received the absentee ballot, and we’re here to pick it up.’”

“The Florida Department of State has received a complaint regarding alleged ballot harvesting in Orange County, which is currently under review to determine if an investigation is warranted,” the statement read.

In a separate statement to Just the News on Wednesday, the department stated that it was made aware of the harvesting issue around Sept. 1, 2022.

“After further inquiry, OECS received additional information related to the allegation on October 17, 2022, and performed a preliminary investigation,” the statement read. “Since OECS is an investigative entity and does not [have] authority to make arrests, the office forwarded the complaint to the Florida Department of Law Enforcement for possible violation of section 104.0616, Florida Statutes,” it added.

By the way, if you try to go to the Just the News story on Twitter, you get this message:

WND reports: A federal judge has ordered True the Vote founder Catherine Engelbrecht and researcher Gregg Phillips to identify their source in their investigation of the election software company Konnech by Monday or face jail.

True the Vote researchers Catherine Englebrecht and Gregg Phillips investigated the CEO of Konnech Eugene Yu and his voting machines. Yu sued them for defamation.

Konnech CEO Yu is now on trial. The judge wants to know who their whistleblower is by Monday. They face imprisonment.

Yu was arrested and charged by Los Angeles County prosecutors for allegedly storing election worker data on servers based in China.

The Arizona Attorney General is also on True the Vote’s case for not revealing names and more evidence.