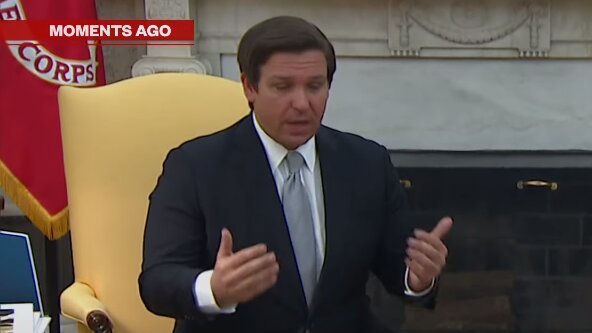 Florida Republican Governor Ron DeSantis fired back at a reporter who questioned his state’s coronavirus response during a meeting with President Trump at the White House on Tuesday.

Reporter: “Governor DeSantis, you did face quite a bit of criticism for not closing your state as soon as some did.”

Governor DeSantis: “What have the results been?

“You’re looking at some of the most draconian orders issued in some of the states — and compare Florida in terms of our hospitalizations per 100,000, in terms of our fatalities per 100,000. You go from D.C., Maryland, New Jersey, New York, Connecticut, Massachusetts, Michigan, Indiana, Ohio, Illinois, you name it, Florida has done better.

“I’m not criticizing those states, but everyone in the media was saying Florida would be like New York or Italy and that has not happened because we understood we have a big, diverse state, we understood the outbreak was not uniform throughout the state. And we had a tailored and measured approach that not only helped our numbers be way below what anybody predicted but also did less damage to our state going forward. I had construction going on, the road projects, but we did it in a safe way and we did it I think in a way that is probably more sustainable over the long term.”