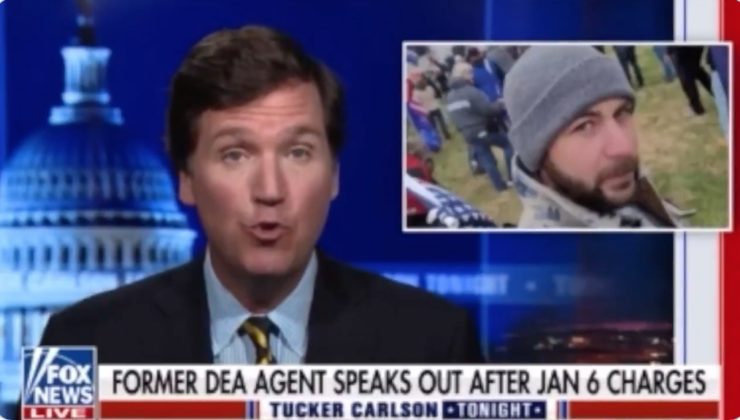 Carlson explained to his audience that asking questions about what really happened on January 6th has earned him and others to be labeled “conspiracy theorists and unpatriotic” by propagandists in the media. “As it turns out, we were right to ask those questions, and tonight, we’ll show you why,” Carlson said. He explained, “Mark Ibrahim is a 32-year-old Army veteran who served in Iraq. On January 6th of this year, he was a federal agent. He worked for the Drug Enforcement Administration—the DEA. Ibrimham says he went to the Capitol that day because he was invited by an FBI informant, a man he had known in Iraq. We have confirmed that is true.”  Carlson explained that they reached out to Ibrahim’s FBI informant friend and that while he denies he encouraged anyone to break the law, he did confirm Ibrahim’s story.

According to Tucker, the FBI knew that Ibrahim’s friend, the FBI informant would attend the rally that day.

What happened next is so crazy, it’s literally unbelievable.

Tucker Interviews A Former DEA Agent Who Says He Was Invited By A FBI Informant To Go The Capitol That Day & Was Encouraged By This Man To Go Into The Capitol pic.twitter.com/iRsY2VTz79

Should anyone trust our intelligence agencies anymore? Are we still living in a free country?