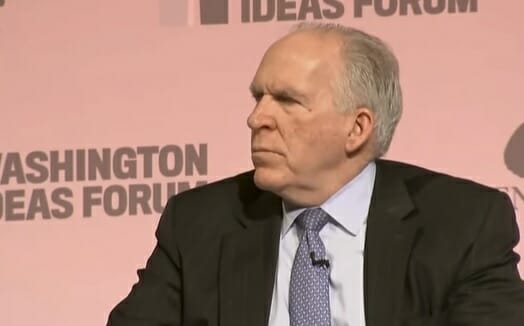 Former US Attorney Joe DiGenova says he believes that Obama’s CIA Director John Brennan is included in the Durham Investigation and believes NPR and the MSM’s reporting is not accurate.

Former US Attorney Joe DiGenova was again on Mornings at the Mall on Monday morning.  In his discussion this week, it was noted that reports came out this past week that John Brennan was not a likely candidate in John Durham’s investigation of the Russia collusion crimes.  DeGenova said the following about Obama’s former CIA Director John Brennan (at the 5:30 mark):

Interviewer: …NPR with a follow up report, saying the Democrats are concerned about an October surprise from Durham. But baked into the NPR coverage is a revelation that Durham has not made John Brennan a target of prosecutors.  In fact, Brennan has been supposedly told that he is not a target of prosecutors and that the former CIA Director’s involvement in the case is to help with technical aspects of the case.  What do you make of these stories?

DiGenova: I do not believe the NPR story.  It doesn’t make any sense.  It’s completely inconsistent with the public record that we know about Brennan’s role and his consistent theme of being critical of the Administration and people and making suggestions both before, during and after his term as CIA Director that the President was a Russian asset.  So it may very well be that John Brennan is not going to be indicted, that doesn’t mean that he isn’t a target.

By the way, the reporting by NPR on this has been abysmal.  They have long since ceased to be a news organization.  They are an arm of the Democrat Party just like the major networks and the major cable networks except for FOX.

As reported earlier, President Trump on Tuesday morning lashed out at “dirty cops” in the US intel agencies who targeted his 2016 presidential campaign.

Trump started off by blasting John Bolton then turned his ire toward Comey, Clapper and Brennan, the architects of Spygate.

..so called American Intelligence were Dirty Cops who have now proven to be sleazebags at the highest level like James Comey, proven liar James Clapper, & perhaps the lowest of them all, Wacko John Brennan who headed the CIA, you could perhaps understand my reluctance to embrace!