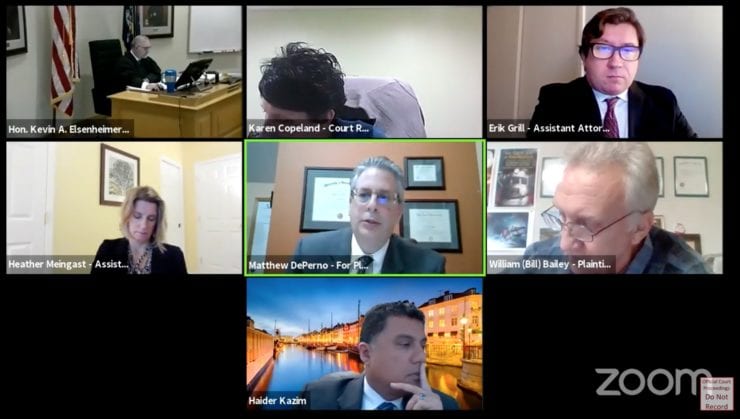 On Monday December 14, 2020, during an emergency hearing, MI 13th Circuit Court Judge Kevin A Elsenheimer granted permission to Attorney Matthew Deperno to release the findings from their forensic examination on 16 Dominion Voting machines in Antrim County, MI where thousands of votes flipped from President Trump to Joe Biden on November 3, 2020.

In his lawsuit against Antrim County, Matthew DePerno claimed that based on the evidence they have provided to the court that Dominion Voting Systems “committed material fraud or error in this election so that the outcome of the election was affected.”

This morning,  Judge Elsenheiemer gave Matthew DePerno permission to release the results of the forensic study with the provision that he make a few redactions, which DePerno claims were “minor.” The judge made it clear that the report could be released today, but only after MI Assistant AG Eric Grill approved the agreed upon redactions.

DePerno said the redactions were “not relevant,” and that the key part of the report has been released in his bombshell report.

After the forensic examination of 16 Dominion Voting machines in Antrim, Co. MI, Allied Security Operations Group has concluded that the Dominion Voting machines were assigned a 68.05% error rate. DePerno explained that when ballots are put through the machine, a whopping 68.05% error rate means that 68.05% of the ballots are sent for bulk adjudication, which means they collect the ballots in a folder. “The ballots are sent somewhere where people in another location can change the vote,” DePerno explained.

Based on the Allied Security Operations report, Constitutional Attorney Matthew DePerno states: “we conclude that The Dominion Voting System should not be used in Michigan. We further conclude that the results of Antrim County should not have been certified.

“The vote flipped based on the algorithm,” DePerno claims. “It can be done manually or through a machine. We believe it was done through a machine. It’s either a function of the program, or it’s done offsite. My guess is that it was shipped offsite, adjudicated, and then sent back to the system, or it was done internally in the program. It was one of the two,” he explained.

The report shows the change in the vote totals on Nov 3, Nov 5, and Nov 21. Paragraph 7 states: “The results of the 2020 Antrim County election are not certifiable.