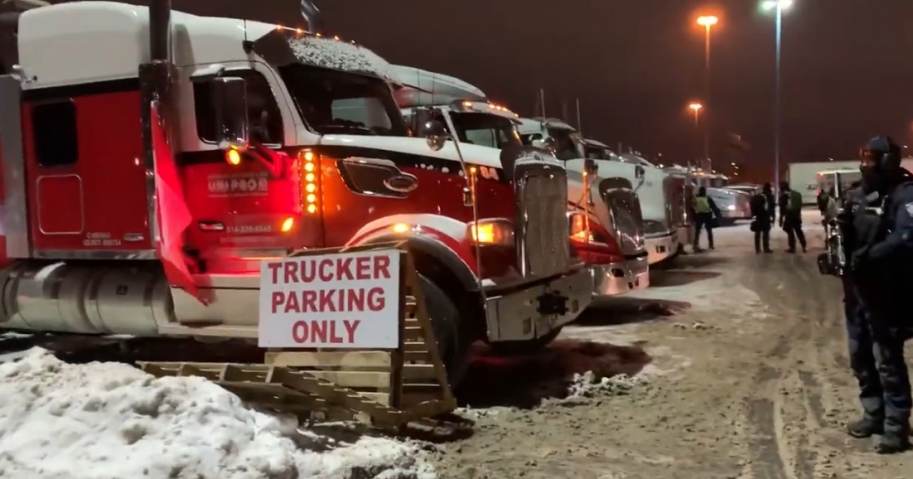 On Tuesday, Alberta Premier Jason Kenney announced a ‘three-stage plan’ to ease the Province’s Covid-19 restrictions, starting with doing away with mask mandates for children and the dystopian vax pass system.

But, for the truckers all across Canada, the half-assed effort, that leaves the door open to more mandates being reimposed, just isn’t enough. This is about freedom.

On Tuesday night, several of the Trucker Freedom Convoy’s main organizers gathered to discuss the progress they have made. During the meeting, the group reiterated their commitment to sticking this protest out until Canadians see a “permanent” end to all freedom-crushing ‘public health’ measures, not just a temporary, delayed, or partial one.

Video of the meeting that was provided by Rebel News shows the organizers all in agreement – they aren’t going anywhere until their demands are met.

One of the speakers addressed the crowd about Kenney’s three-stage plan:

“He has not changed, really. He’s backpedaling like crazy. He’s making excuses for what happened in the past, and he is continuing to lie,” the speaker said. He’s leaving an open door – with future variants – to put in mandates again.

“So, we have got to stick this out until all mandates are lifted permanently,” he concludes to the crowd, who bursts out in cheers of approval.

It’s what truckers do, they are in it for the long haul.

Coutts border blockaders were not happy with the announcement by Jason Kenney today, updates sure to come soon.

Help their legal defence at https://t.co/FgSvcLfPNypic.twitter.com/JD2Xo9bIig

These truckers are heroes.

The tyrants are running scared, the media is in full spin mode, and the world is watching.

From Australia to Poland, to Greece, to Germanyall across Canada, and several other countries around the world, truckers are coming out in full force to stand against this freedom-crushing oppression.

It’s time for the Land of the Free and the Home of the Brave to take it to DC and put an end to this pandemic once and for all.

Freedom Convoy Organizers Reiterate Demands For a “PERMANENT” End to ALL Tyrannical Covid Mandates, Not a Temporary One – Will Stay Until It Happens – (VIDEO) appeared first on The Gateway Pundit