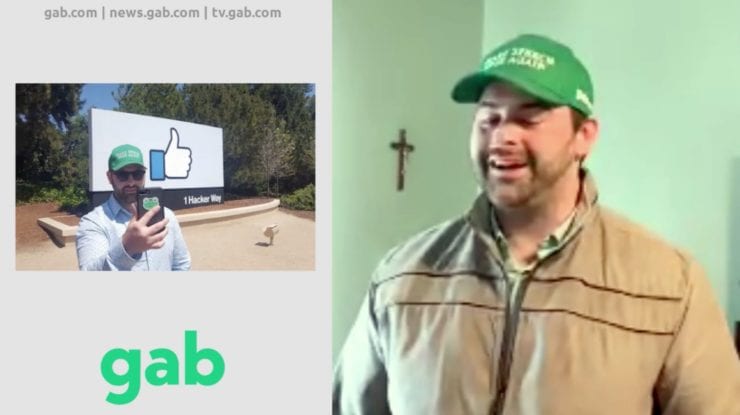 During an interview with WBRE, a local tv station in Scranton, PA, Andrew Torba, the Christian CEO of Parler, answered many of the questions Americans are asking about the alternative, free speech platform.

100 Percent Fed Up – Torba explains why he founded GAB in 2016 as an alternative, free speech social media platform:“I was living and working in Silicon Valley at the time, and I had very close relationships inside of Facebook, Twitter, and Google, by nature of my last start-up company which was a digital advertising company,” Torba explained, adding, “I got to see the evils of their business model for many years.” The GAB CEO explained that because of the many relationships he developed within these big tech companies, he had “insider sources” who warned him that “the rise of censorship was coming and was inevitable.”Torba shared that he witnessed the manipulation of trending topics on Facebook, “which a whistleblower from inside of Facebook leaked in May of 2016,” explaining, “And that is what really pushed me over the edge.”“This whistleblower from Facebook admitted that they were actively suppressing conservative news, conservative topics, conservative sources, conservative stories from the trending topics product, which is used by billions of people every day as a source of news. They have since retired this process since the whistleblower came out,” he explained.“So, that was really the impetus behind starting this. The left was saying if you don’t like, go build your own—so that’s exactly what I did,” Torba said.

100 Percent Fed Up has also joined GAB and will be posting all of our content on their free speech platform. Please follow by clicking HERE.

When Torba was asked what he sees happening right now in America, he responded: “Free speech and the free flow of information has never been more important,” he said, adding, “What we’re seeing in America right now is the rise of Communism—plain and simple. If you study history, you can see many parallels of communist regimes that have risen up throughout history to what is happening right here in the United States of America, right now today.Their, I guess, impetus is critical theory, which is a demonic and toxic ideology that basically destroys everything around itself.”Torba blasted the big tech bullies for their part in the communist takeover of America, “And anybody that criticizes this uprising, this oligarchy that we’re seeing, this communist regime uprising that we’re seeing from these billionaire elites who think that they own this country, that think that they run this country, is silenced, and that includes the president, that includes the 75 million Americans who support the president.”Torba explained that they were the first to have their apps pulled from Google and Apple. They