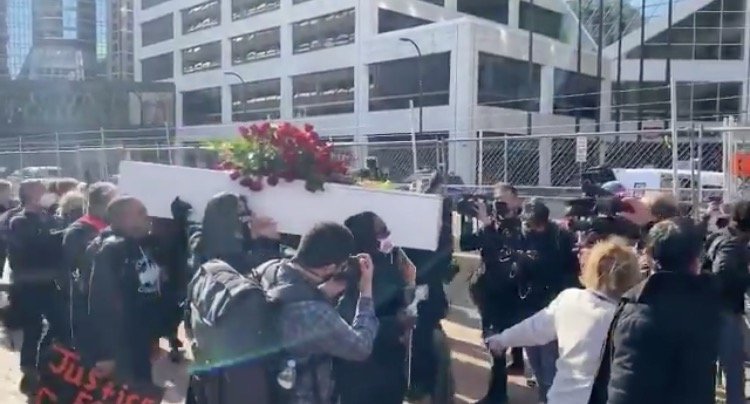 George Floyd protestors marched through downtown Minneapolis Sunday on the eve of the jury selection for Derek Chauvin’s trial.

George Floyd died last spring after Minneapolis police officer Derek Chauvin knelt on his neck for 8 minutes during an arrest.

According the medical examiner, Floyd had a “fatal level” of fentanyl in his system at the time of his death.

Minneapolis is spending millions to protect the city from leftist rioters during the trial of Officer Derek Chauvin.

The death of George Floyd resulted in mass riots and damages into the billions. Hundreds of Minneapolis businesses and homes were destroyed by the leftist rioters.

Minneapolis is reportedly spending around $36 million for security during the trial.

George Floyd protesters chanted “no justice, no peace!” on the eve of the jury selection.

NOW: a march is beginning from the Hennepin County Government Center in downtown Minneapolis, led by pallbearers with a casket. Jury selection in the Derek Chauvin trial is set to start tomorrow @WCCOpic.twitter.com/2liRzrv2s2

A panel of judges last week ruled that the judge must consider reinstating a third-degree murder charge that was dropped last year.

The defense is expected to argue that the Minneapolis police manual trains officers to use the neck restraint that Chauvin used on George Floyd.

The defense will also argue that George Floyd died of a fentanyl overdose after the medical examiner determined Floyd had a fatal level of fentanyl on his system at the time of death.