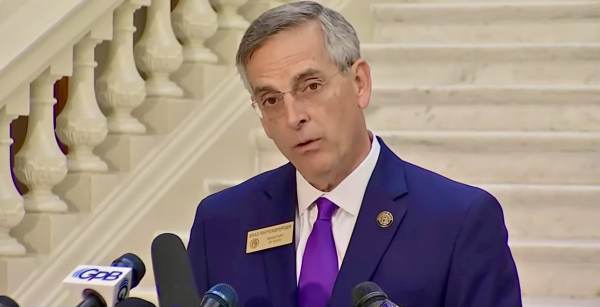 Georgia Secretary of State attacks his own as the Fulton County election mess heats up in Georgia.  Unfortunately, everyone now knows he oversaw the mess.

Yesterday, eight months after the 2020 Election, FOX News’ Tucker Carlson finally woke up and realized there was fraud in Fulton County, Georgia.

This was after President Trump responded to the news coming out of Fulton County yesterday on election fraud.

President Trump: News from Georgia “Beyond Incredible” – We Will Lose Our Country If this Is Allowed to Stand

This all comes after numerous issues were uncovered in Fulton County by the team of auditors with VoterGA.

Georgia Secretary of State, the corrupt Brad Raffensperger, owns the entire mess.  He refused to take President Trump’s advice and look into the fraud in his state and instead set up the President of the United States showing he was a part of the fraud in Georgia.

Today Raffensperger threw Fulton County Election workers, Rick Baron and Ralph Jones under the bus for the state’s corruption in Fulton County.  Unfortunately for him, former New York Police Commissioner called out Raffensperger for his actions in the election.

You piece of shit! You denounced President Trump’s claims and told the media and Georgians it was a perfect election. You knew about the corruption and failures on November 7, and you did absolutely nothing about it. You and @GovKemp should resign immediately. https://t.co/94ppP22xAu

Georgia’s election in 2020 was a corrupt and criminal mess.  The people of Georgia should demand a full forensic audit of their state’s 2020 Election results.  All of America knows that Joe Biden did not win Georgia no matter what Raffensperger claims.