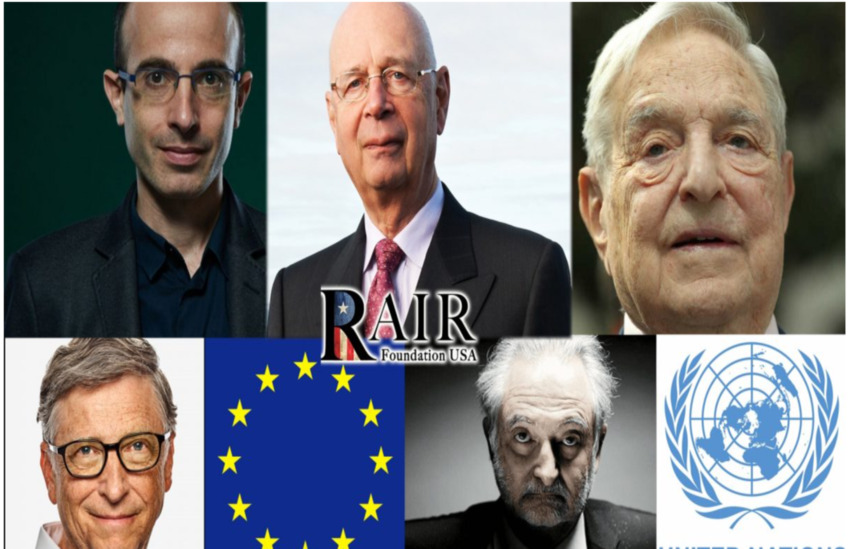 In 2014, Jacques Attali, the mastermind behind the Great Reset, “predicted” on French television that World War III would start with Ukraine. The same year, former French President Nicolas Sarkozy, who Attali helped mold, warned, “we will proceed together toward a new world order, and nobody, and I do mean nobody, will be able to oppose it.”

Now, in 2022, we are seeing the World Economic Forum leader Klaus Schwab counterpart Jacques Attali and Nicolas Sarkozy’s predictions come to fruition. Today, many other high-profile figures warn that Globalists are trying to escalate the Russia and Ukraine conflict to weaken nation-states and strengthen their global governance.

Archbishop Carlo Maria Viganò, a former Catholic apostolic nuncio to the United States, whom RAIR Foundation USA has written about before, published a letter blaming the Deep State within the United States, the European Union, and NATO for the war in Ukraine.

The U.S. and Europe should not marginalize Russia but form an alliance to resume trade and restore Christian civilization. According to Vigano, that is the only way to save the world from the transhumanist and the medical-technical globalist monster:

The United States of America and the European States must not marginalize Russia but build an alliance with it, not only to restart trade for the prosperity of all, but in lieu of the reconstruction of a Christian Civilization, which will be the only one able to save the world from the transhuman and medical-technical globalist monster.”

The Archbishop believes that Russian President Vladimir Putin has been cornered by an aggressive NATO, supported by the United States. The globalist elite are trying to escalate the conflict for their own, explains Vigano:

“This is the trap for Russia just as much as Ukraine, using both to allow a globalist elite to bring its criminal plot to fruition.”

According to Vigano, the war is part of a plan to establish a new world order. The Archbishop said the U.N., NATO, the International Monetary Fund, the European Union (E.U.), and billionaire oligarchs like George Soros and Bill Gates are conspiring to help establish a world government.

He portrays Ukrainian President Zelensky as an E.U. puppet, ‘a sympathetic outsider who is used to stir anti-Russian feelings’,

The image of Zelenskyy is an artificial product, a mediatic fiction, an operation to manipulate consensus that was nonetheless able to create a political character in the Ukrainian collective imagination and who in reality, not in fiction, was able to seize power.”

Vigano also says Ukrainians are being “held hostage” by the globalist totalitarian regime and advise them against joining the European Union. Instead, the Archbishop urged European nations to seek their independence by once more finding “sovereignty, their identity, their faith. Their soul.”

In so-called democratic countries, dissent is censored. The Archbishop said that the pandemic has exacerbated these dynamics, adding that the mainstream media has “blatantly lied.”

People who refuse to call Putin an ‘occupier’ or ‘tyrant’ will receive the same treatment as people who spoke out against the corona vaccines, explains Vigano.

He also criticized the lack of coverage of neo-Nazi groups in Ukraine that have attacked Russian-speaking Ukrainians in Donetsk and Luhansk. As reported at RAIR Foundation USA, German journalist Alina Lipp was just labeled a “terrorist” by the Ukrainian government for undermining the Western Narrative about the Russian invasion.

During a podcast on the Thrivetime Show, he added that he is not a Putin apologist but understands the underlying dynamics in Ukraine. The globalist World Economic Forum leader Klaus Schwab, billionaires like Bill Gates, and futurologist Yuval Noah Harari, are unhappy that Putin has invaded Ukraine. What is happening in Europe now is an imbalance of the world order as they envision it,” said Flynn.

These people, according to Flynn, are highly intelligent, have many resources at their disposal, and have mapped out a specific strategy for the development of the world. However, “God and a soul are not part of that strategy,” he said.

Globalists and their organizations aim to weaken countries’ sovereignty and make their economic activities unstable, making it easy to undermine their national culture.

Ironically, Vladimir Putin was one of the most active leaders in the largest globalist organization, the World Economic Forum (WEF). He consistently attended their meetings in Davos, gave speeches, and took a leading role in shaping the trajectory of the Fourth Industrial Revolution.

Putin perhaps did not realize that Russian sovereignty is inconsistent with globalism. They are mutually incompatible.

When Putin was no longer willing to hand his country over to the WEF globalists, they disowned him and threw their support behind Ukranian President Zelensky.

This content is courtesy of, and owned and copyrighted by, https://rairfoundation.com and its author. This content is made available by use of the public RSS feed offered by the host site and is used for educational purposes only. If you are the author or represent the host site and would like this content removed now and in the future, please contact  conservativechoicecampaign.com  using the email address in the Contact page found in the website menu.